Jaguar has recently updated its compact XE executive saloon, the most significant improvement being the availability of the company's full range of frugal Ingenium petrol and diesel engines.

With diesel rapidly falling out of favour, I chose to review an R-Sport model with a 250PS petrol engine and all-wheel drive. But, first a little history lesson...

Cast your mind back to 2001 when Jaguar was under Ford's ownership and a new small Jaguar was born in the shape of the X-TYPE. Based on the Ford Mondeo, many scoffed that this new model was not a true Jaguar. Early X-TYPES were exclusively all-wheel drive which was an undoubted boon in terms of handling and grip in poor weather conditions. 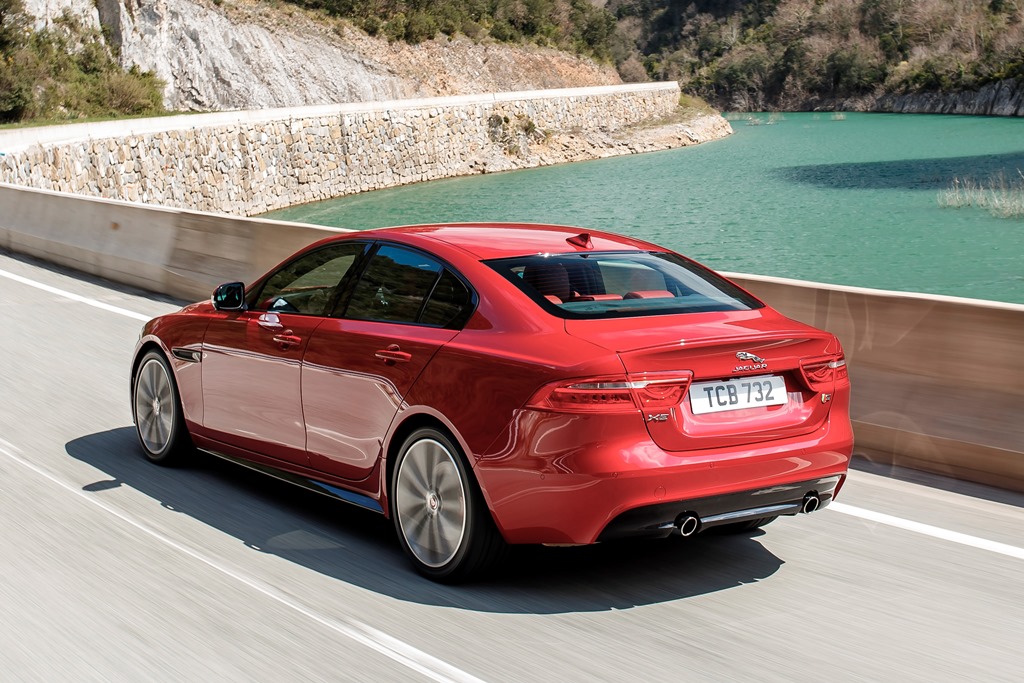 2015 saw the arrival of a new small Jaguar – the XE and late in 2016 an all-wheel drive version was offered. It was initially only available with a diesel engine and when I had one on test early last year, a little light snow allowed me to test its traction in the very worst driving conditions. It proved to be both capable and sure-footed.

So what of the latest Jaguar XE AWD with petrol power and R-Sport trim?

The 250PS 2.0-litre engine is not lacking get-up-and-go and if the mood takes you will sprint from rest to 60mph in under six seconds. Top speed is a heady 155mph if an Autobahn beckons.

Jaguar's familiar eight-speed ZF automatic gearbox is fitted, allowing the considerable power to be deployed with a mere twitch of the right foot. Its operation is super smooth and flappy paddles are fitted when you want to take control…and it's likely you will.

Driven with restraint the Ingenium engine is nicely muted but it can get a little vocal when fully extended. 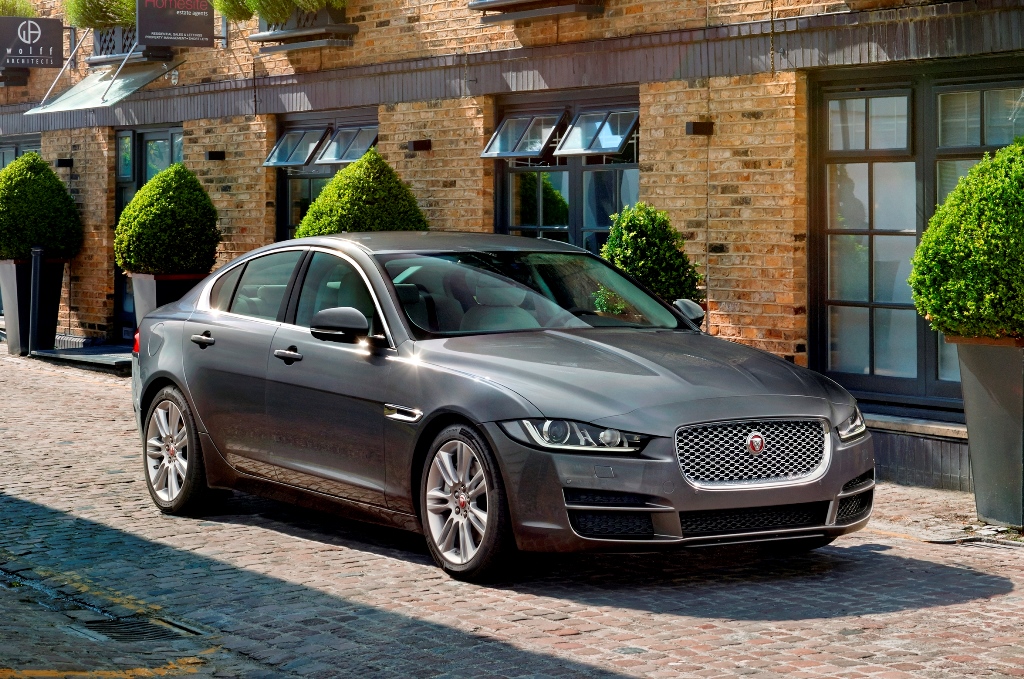 In normal driving conditions, power is sent exclusively to the rear wheels, saving fuel. When a loss of traction is detected by the Intelligent Driveline Dynamics, up to 50 per cent of the power can be redirected to the front wheels in the blink of an eye (or 165 milliseconds, to be precise).

Also helping to keep this beefy XE on the straight and narrow is the Adaptive Surface Response system. This allows some remapping of the engine and stability control according to conditions.

Driving on wet roads, the AWD system inspires confidence and unobtrusively goes about its job of keeping the car on the straight and narrow.

An XE in any guise makes for a truly great driver's car, with nicely weighted steering and lack of body roll though quicker twisty bits. The ride is a tad on the firm side, not helped by the test car's rather stylish optional 19-inch alloy wheels, but will undoubtedly suit the keener driver.

Is there a better driver's car in the class? Probably not! 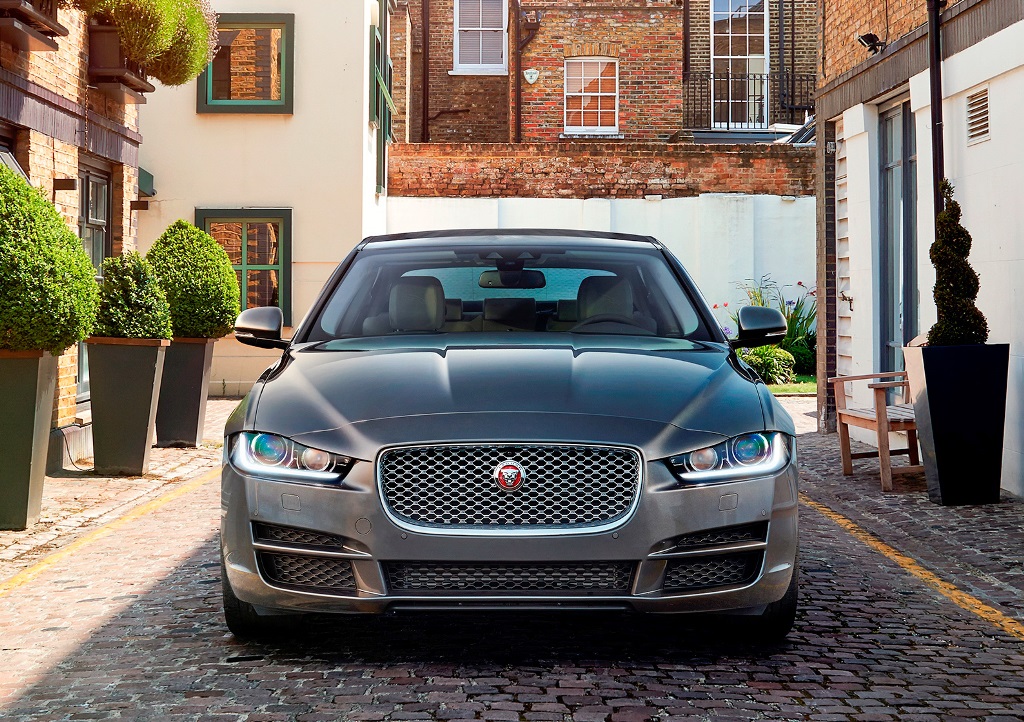 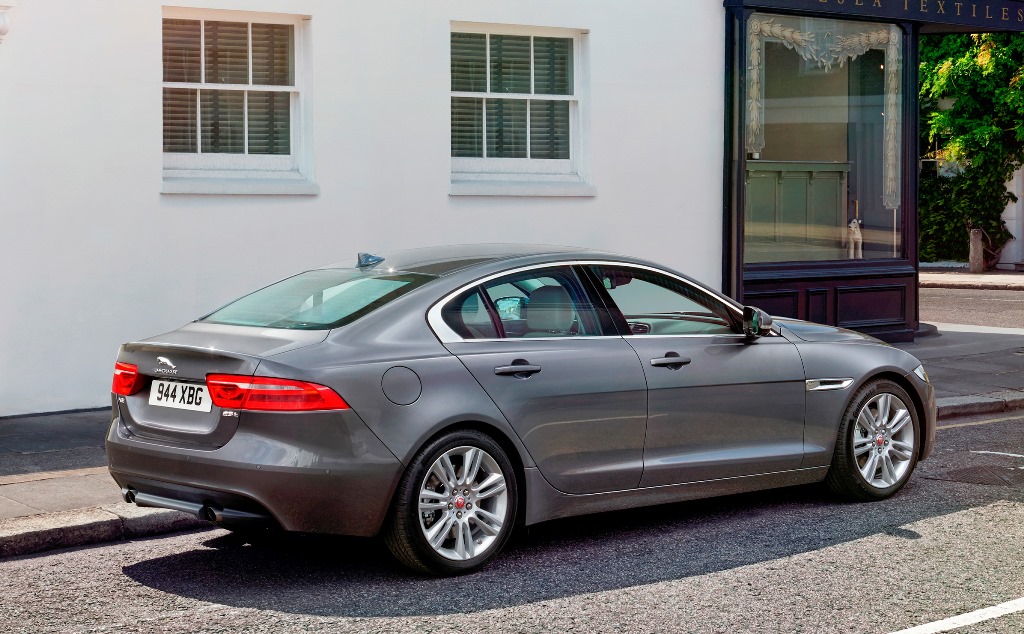 During my test week with the Jaguar XE – which included a representative mix of motorway cruising, some quick A- and B-road work and a modicum of town pottering – I travelled over 550 miles and achieved a little over 32mpg. Jaguar quotes an official 42.2mpg for the combined cycle, so I would suggest my figures are reasonably representative of what is readily achievable. Mention should be made that the 240PS diesel variant promises up to 54.3mpg and looking back at my notes achieved a round 45mpg without difficulty.

The higher mileage driver will be financially better off with a diesel under the bonnet, with its greater torque availability (500Nm versus 365Nm from the petrol), offering a better and more relaxed performance in real world driving. 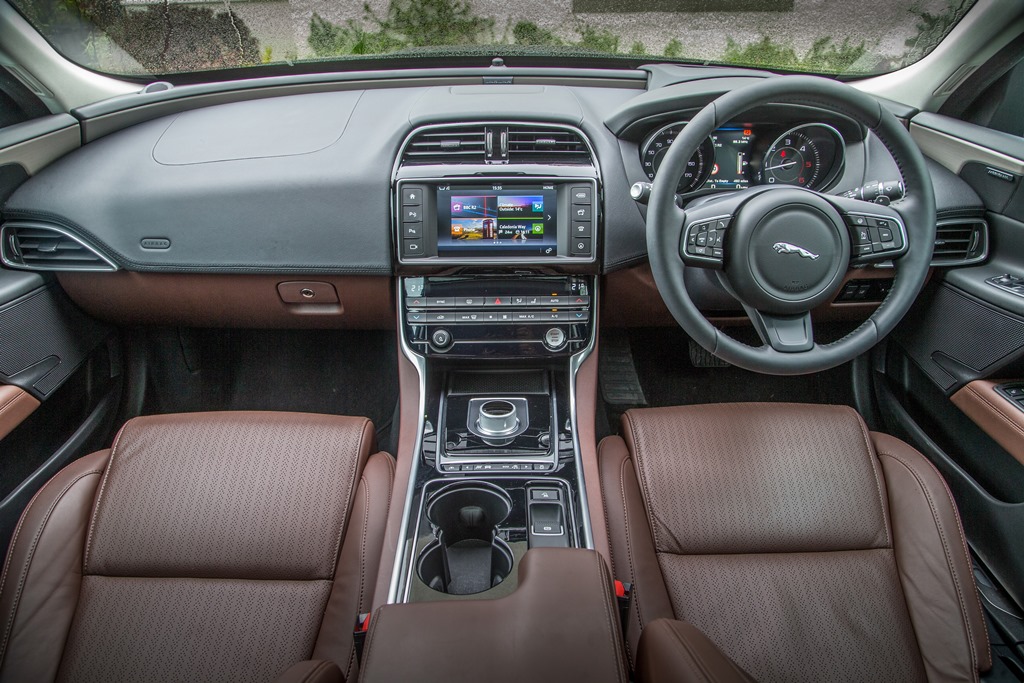 The XE's interior is a lovely place in which to spend time, especially in R-Sport trim as tested. The leather clad seats are sumptuous and supportive and the driving position pretty much perfect. Legroom in the rear is limited and those who regularly carry a full complement of passengers might be better looking at Jaguar's larger XF saloon, also available with AWD. XE boot space is a reasonable 450 litres and while a little on the narrow side, its practical depth makes up for it.

As you would expect of a cat-badged premium executive saloon, the Jaguar XE is very well equipped across the five-model trim range which starts with the SE, Prestige, R-Sport and Portfolio grades, with the potent V6 S at the top of a rather handsome pile. 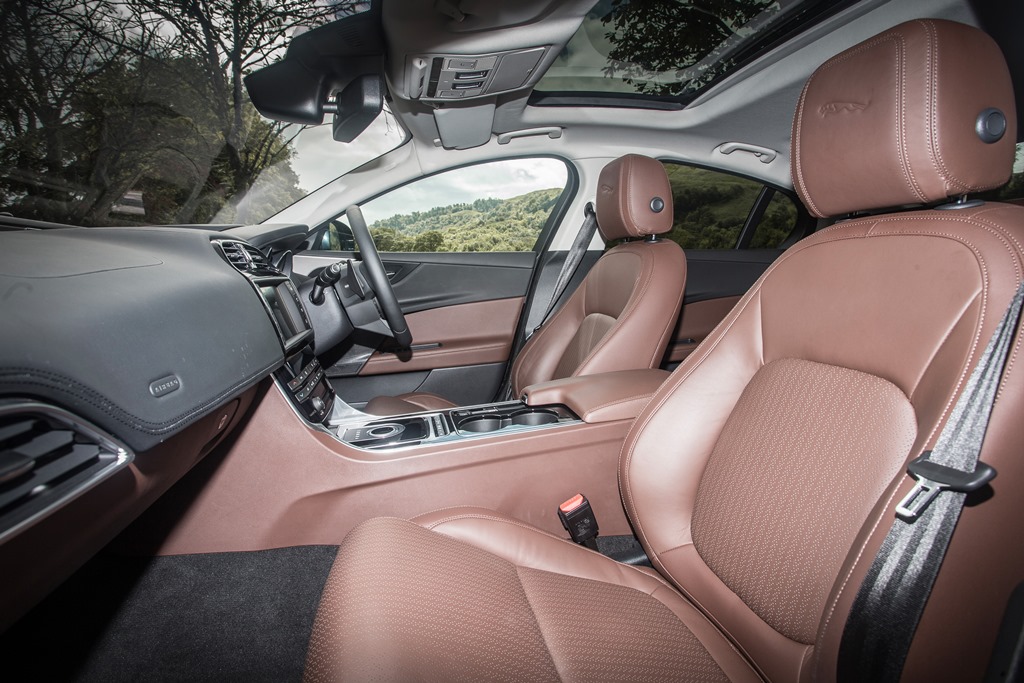 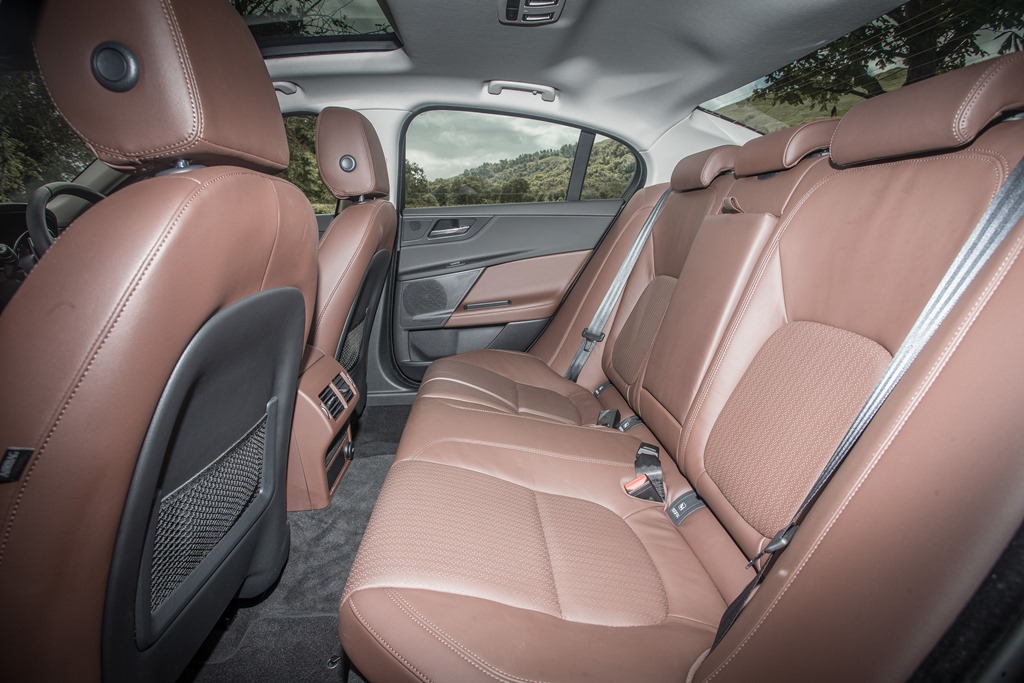 For a more sports-focused XE, the R-Sport as tested replaces the 17-inch alloys for larger 18-inchers and adds leather sports seats and R-Sport embellishments on the steering wheel and kickplates. Outside there's R-Sport body kit which encompasses side sills, boot lid spoiler and subtle R-Sport badging – all tastefully done.

From the options list, you may want to add a few of these niceties: a head-up display pack, 10-way electric front seats, adaptive cruise control, adaptive dynamics and the cold climate pack. If blessed with height, you may want to leave the optional sliding panoramic sunroof box unticked as it encroaches into the available headroom both front and rear. 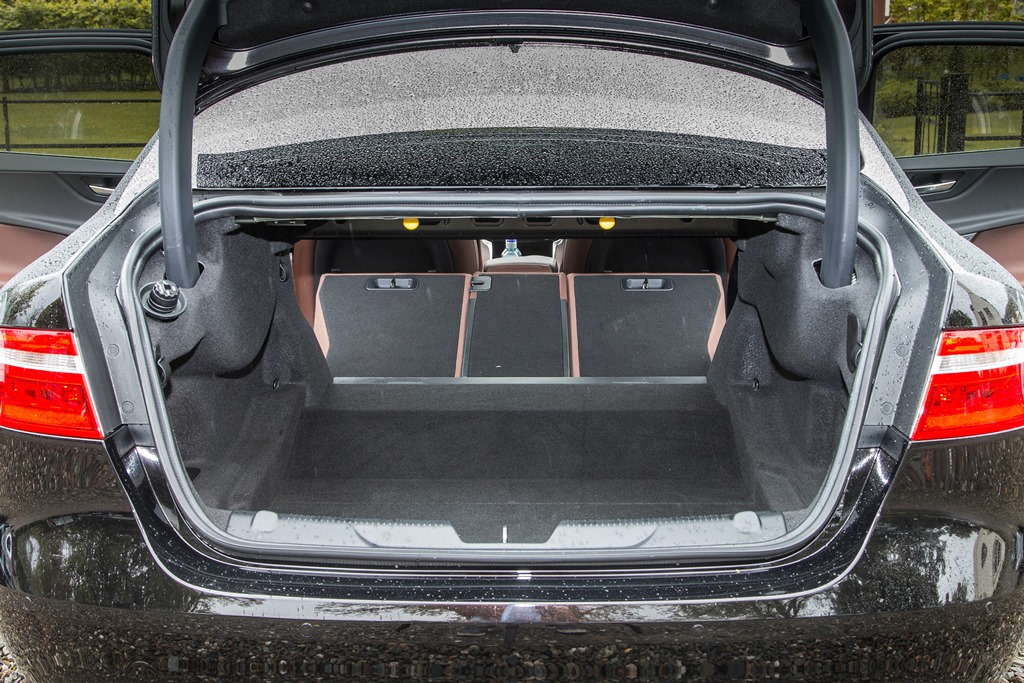 Living rurally as I do, I currently own a 2001 Jaguar X-Type, bought for less than £1,000. Its all-wheel drive traction is commendable and the performance from the sonorous 3.0-litre V6 petrol engine spirited. I won't dwell on the fuel economy figures though.

The AWD option on the XE will undoubtedly be a boon for the rural motorist who needs to keep moving in all weathers. However its benefits in terms of safety however will be appreciated by all and is highly recommended.

Ultimately, the XE is no alley cat. Excellent automotive husbandry by Jaguar makes the XE feel as good a driver's car as the BMW 3-series and the Jaguar badge on the grille carries British panache to make it stand out from the usual EU offerings in this sector. 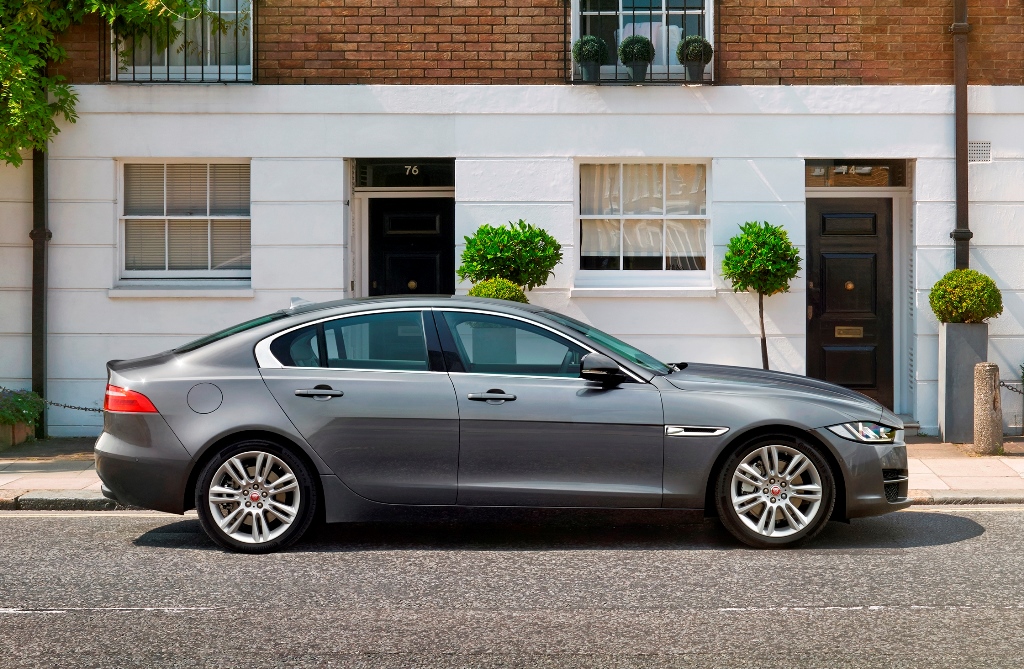