Okay, I'll get the bad news out of the way early doors…bespoke orders of the Volkswagen Scirocco – one of the German automakers most storied nameplates – are no longer being taken by VW retailers as its production has officially ceased after more than 40 years. The good news is that stocks of finished manufactured vehicles do exist and are, of course, still available.

I'm not in the habit of reviewing cars that have been on the market for nine years – let alone those on post-production runout, but I've always held up the Scirocco as a star against rivals such as the Vauxhall GTC, Toyota GT86 or even an Audi TT. But the game's moved on in recent years, so with all the new competition, can the Scirocco's star still shine as brightly? 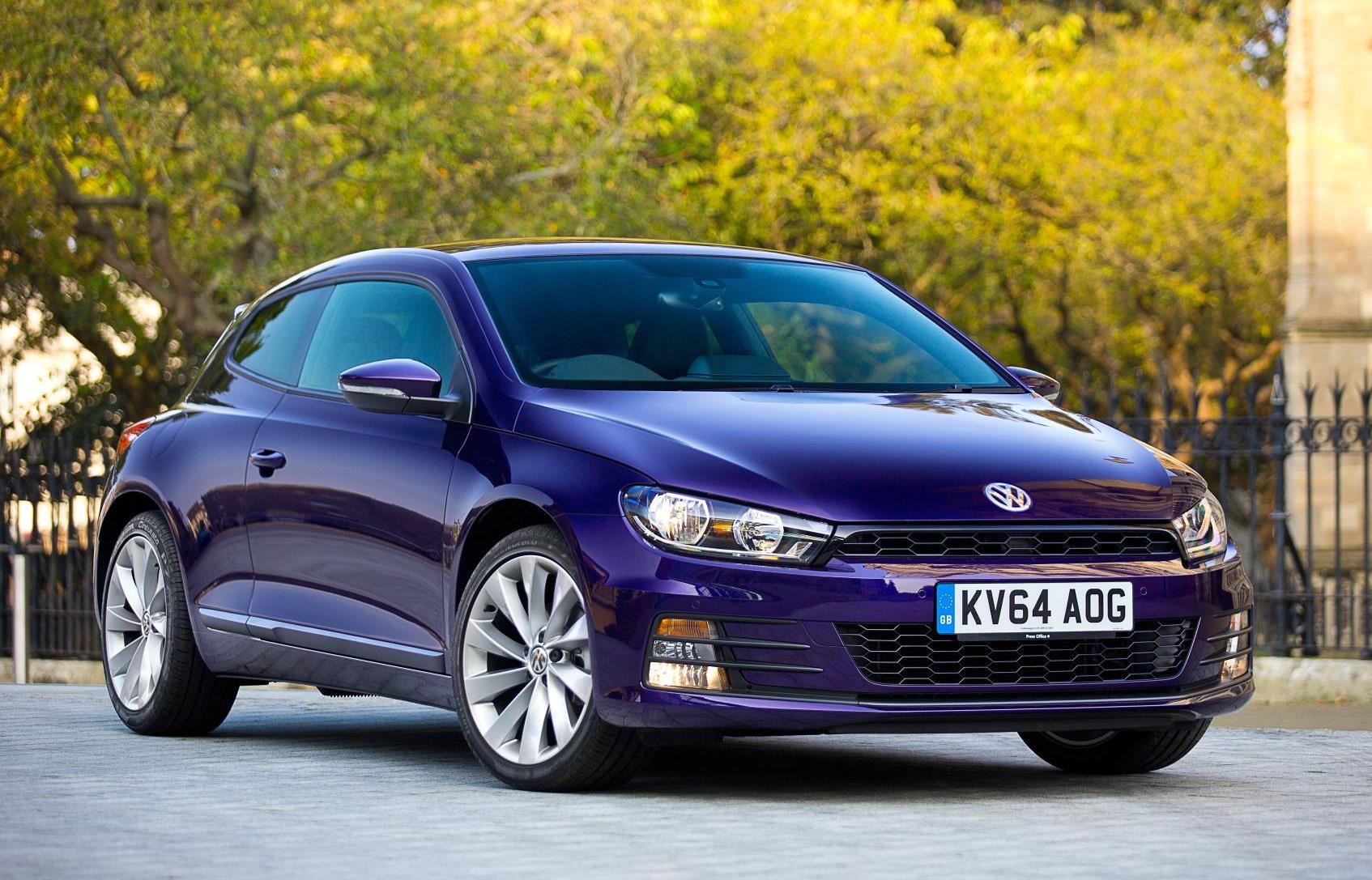 The original Scirocco was designed by Italian car designer and Automotive Hall of Fame member Georgette Giugiaro. It made its debut back in 1974 as a replacement for the Karmann Ghia, VW's second model after the iconic Beetle. The second generation arrived in 1981 and lasted until 1992, when the nameplate was discontinued and replaced by the Corrado. The Scirocco name wouldn't resurface until the third-generation Scirocco arrived in 2008.

As one of the biggest car companies in the world – the VW Group owns Audi, Bentley, Lamborghini, Skoda, SEAT, etc – it has huge economies of scale. That means it can share under-the-skin components and expensive systems such as electric and air-con architectures across multiple models with significant reductions in development costs. With the bean counter's approval, this allows designers a little more freedom on the tactile bits you can look at, feel and hear. 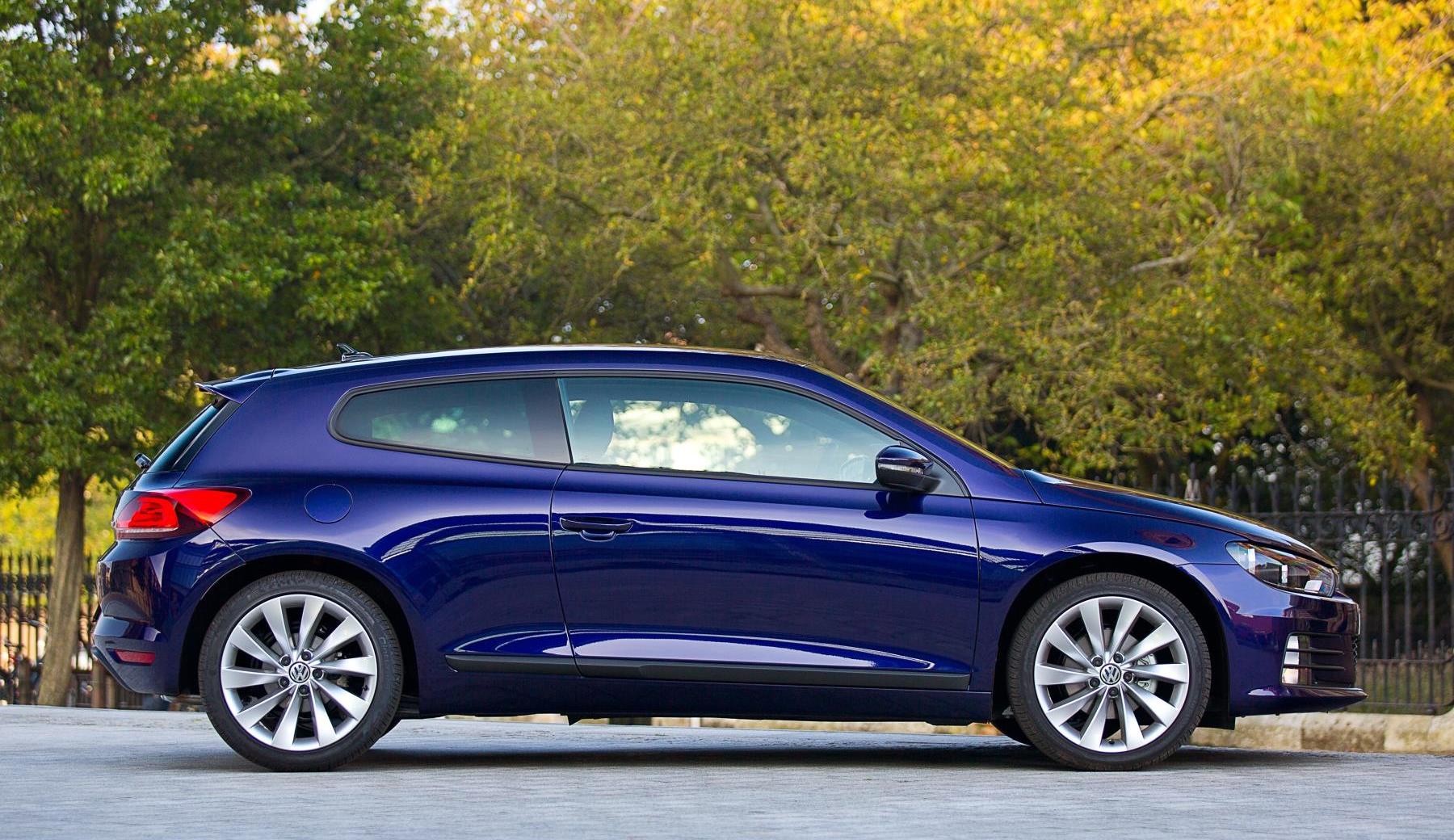 In the case of the Scirocco, this means that what's basically a Golf GTi underneath gets transformed into a rather sleek, three-door coupé-like hatchback, with a completely different body from the Golf. While the GTi has always been a favourite, ultimately it's still just a Golf. The Scirocco feels different, a little bit special, a little more personal. The squat front end and thin grille and light arrangement aren't really like other VW front ends...at least not nowadays. Plus, there are neat little details such as the slight bulges in the roofline which rise up to cover where the boot hinges to the roof.

When you consider the Scirocco first went on sale in 2008, it is remarkable how well it has aged. The interior still looks contemporary with plenty of familiar VW switchgear. Racing-style sports seats are excellent and not only look good, but also offer good lateral support. Everything is bolted together well and main controls fall to hand easily, but rear visibility is poor, thanks to its sweeping rear. Still, the driving position is spot on and the controls feel good. 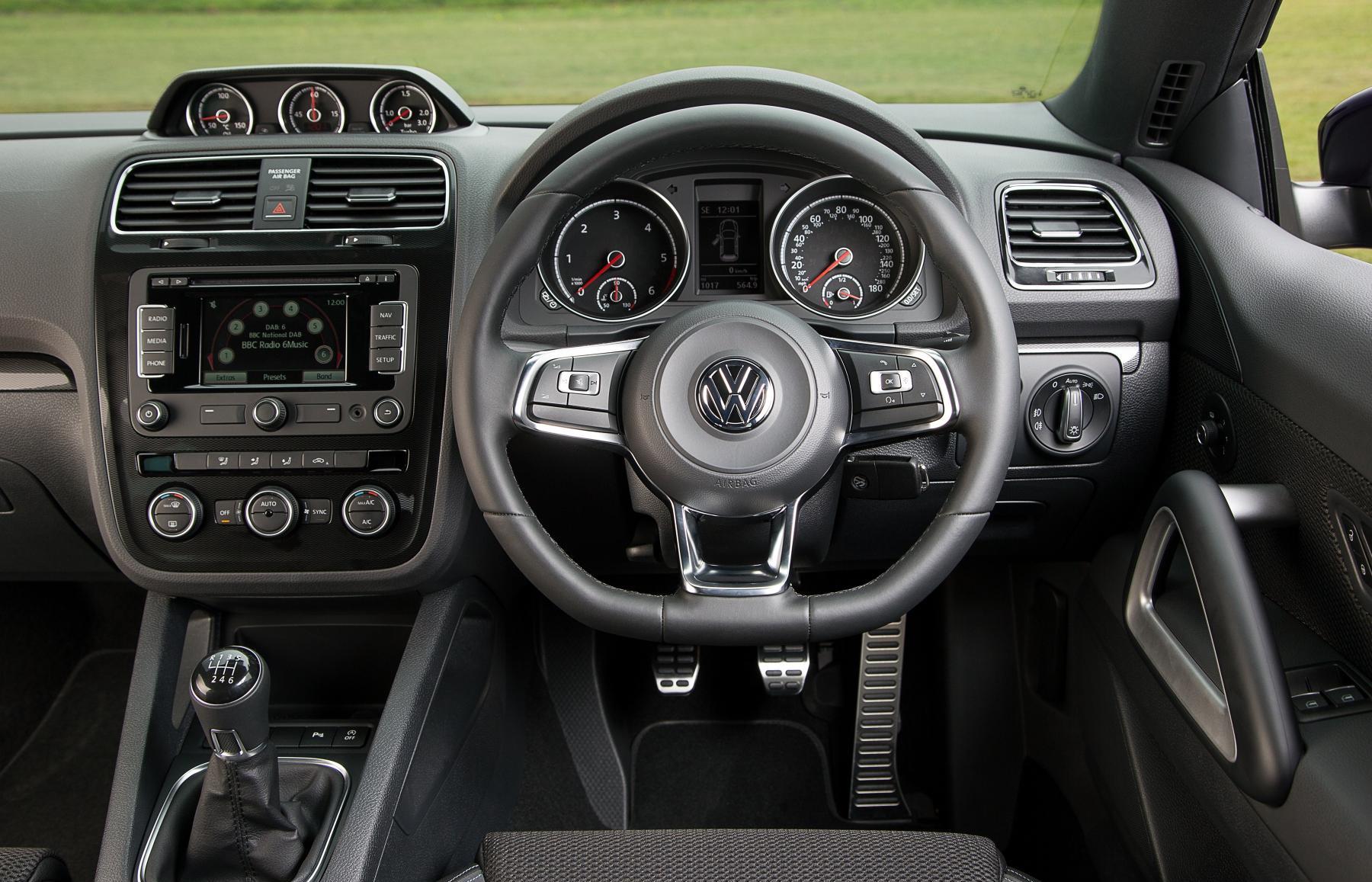 A high waistline and slim windows make seeing out of the Scirocco harder than perhaps you would like and all-round visibility is further compromised by notably thick A-pillars.

The Scirocco offers a higher level of practicality than most compact coupés, but rear space is at a premium and are really only suitable for children or in-betweeners. The boot is relatively compact too, measuring 312/1006-litres, and has a smaller opening than a more conventional hatch, making getting larger items in a bit trickier. 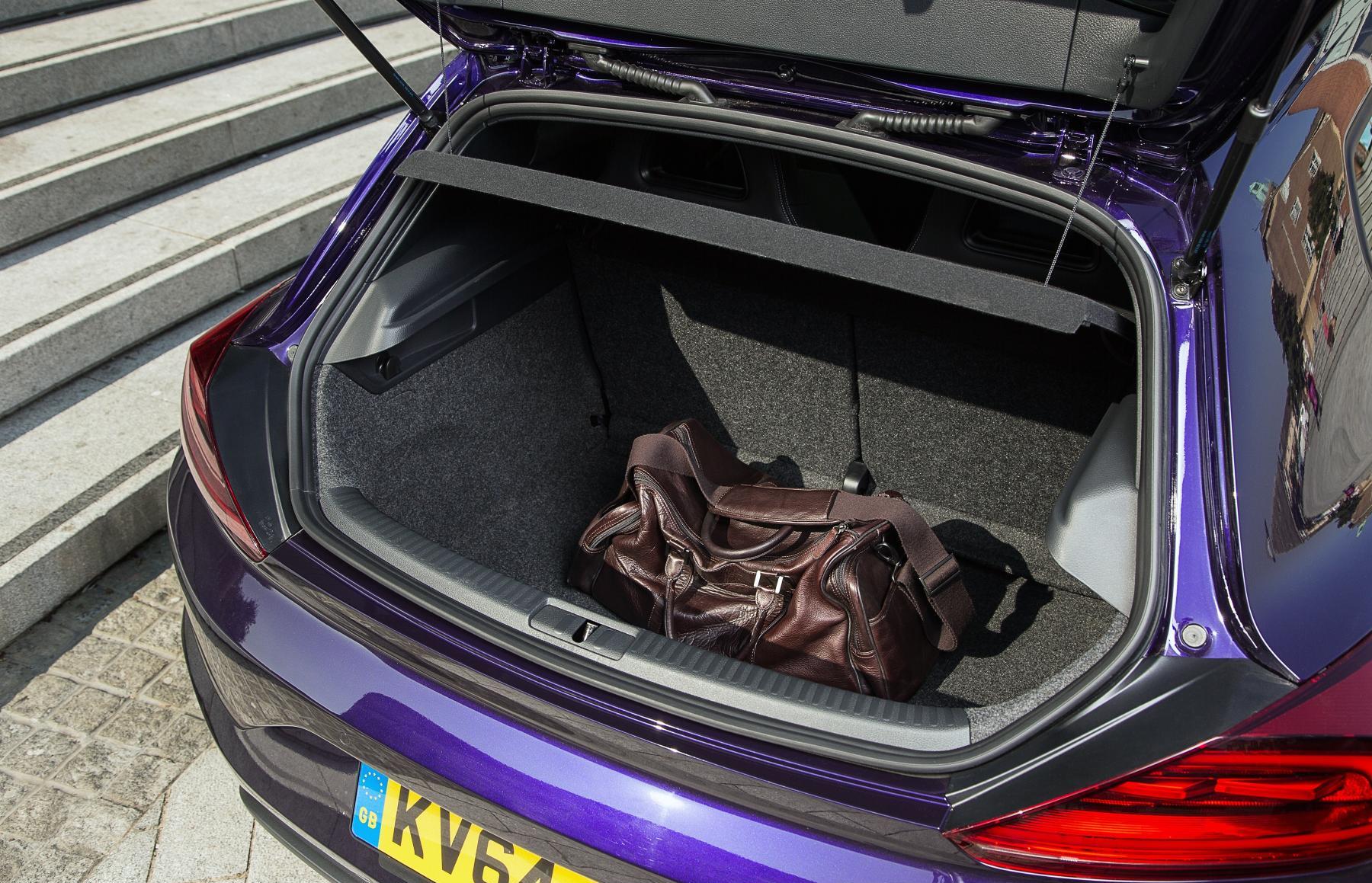 There are seven trim levels to choose from - Scirocco, Scirocco GT, GT Black Edition, R-Line, GTS and R. The entry-level model gets 17in alloy wheels, a roof spoiler, brake discs all round, front electric windows, automatic lights and wipers and electrically adjustable and heated wing mirrors as standard, while inside there is air conditioning, a cooled glovebox, and Volkswagen's Composition infotainment system complete with a 6.5in touchscreen display, DAB radio, Bluetooth and USB connectivity. 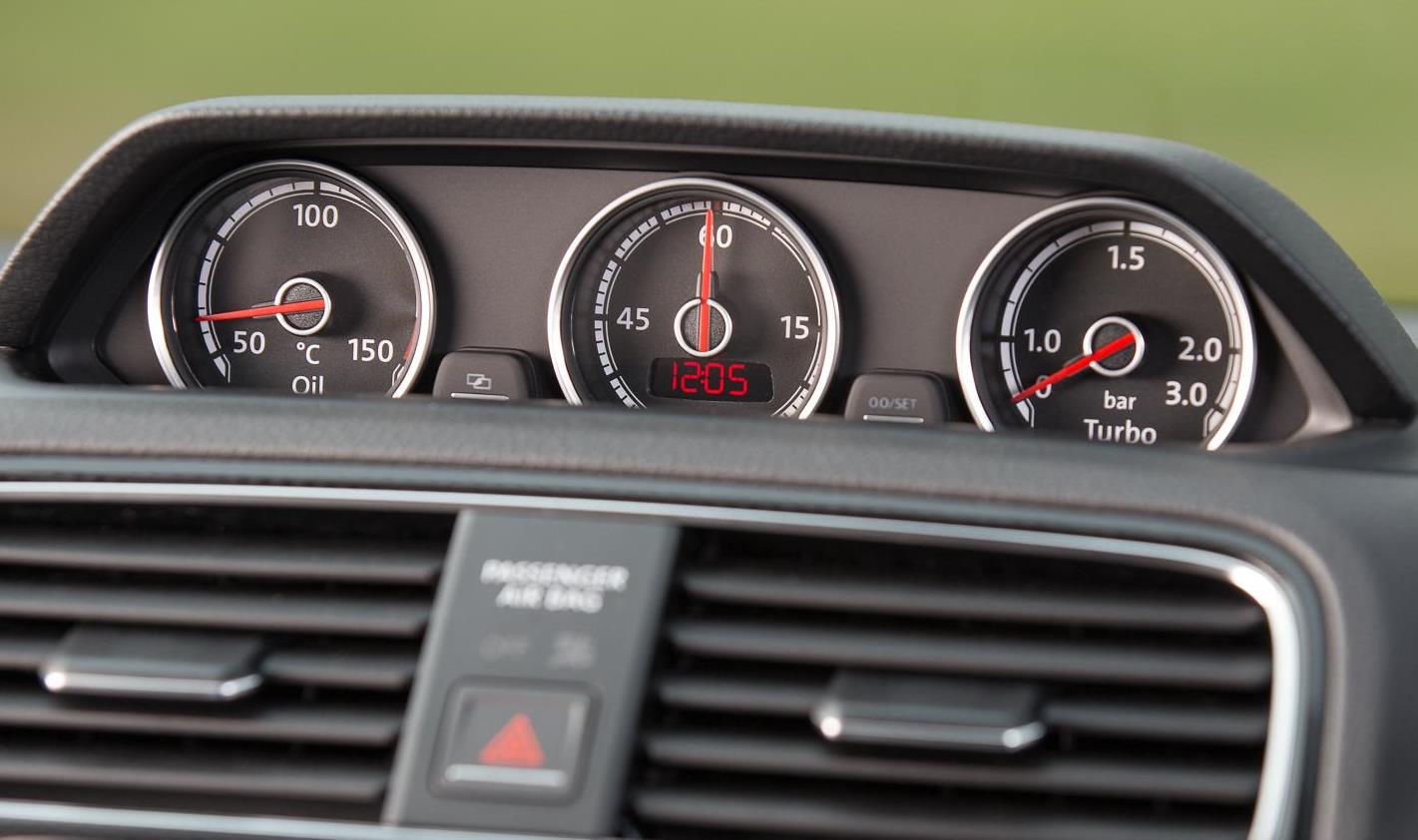 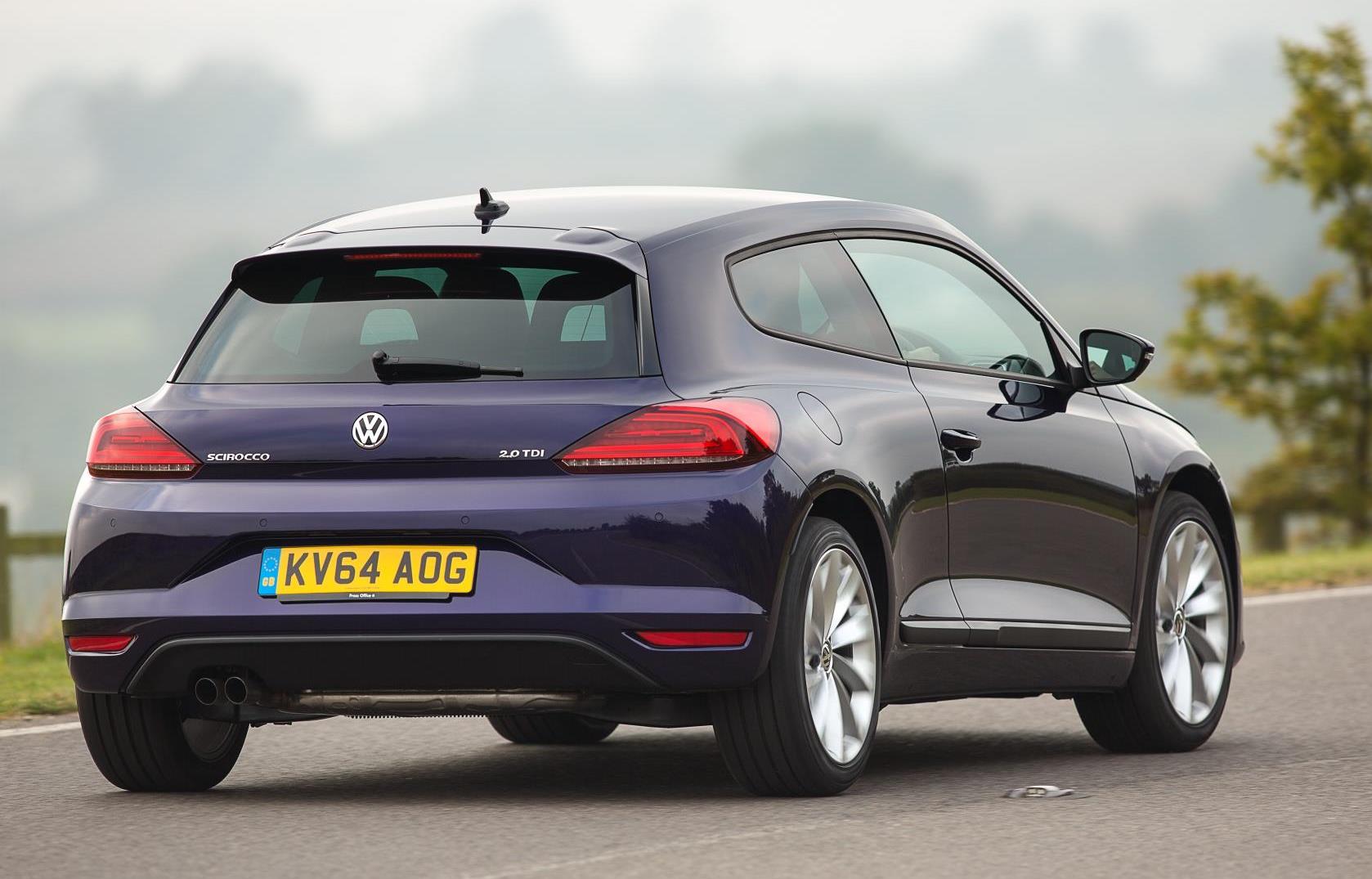 The entry-level 1.4-litre petrol Scirocco is pretty brisk; it pulls smoothly from low revs and doesn't feel out of its depth on quicker roads. It does its best work between 2,000 and 4,000 rpm, however, so it's best to keep it within this range.

The Scirocco's handling is grippy and predictable and the six-speed manual gearbox has a positive, precise action, complemented by accurate steering and an electronic stability system that allows just enough playfulness before it applies a steadying hand. A Seat Leon SC feels more agile, but the Scirocco still handles pretty well. 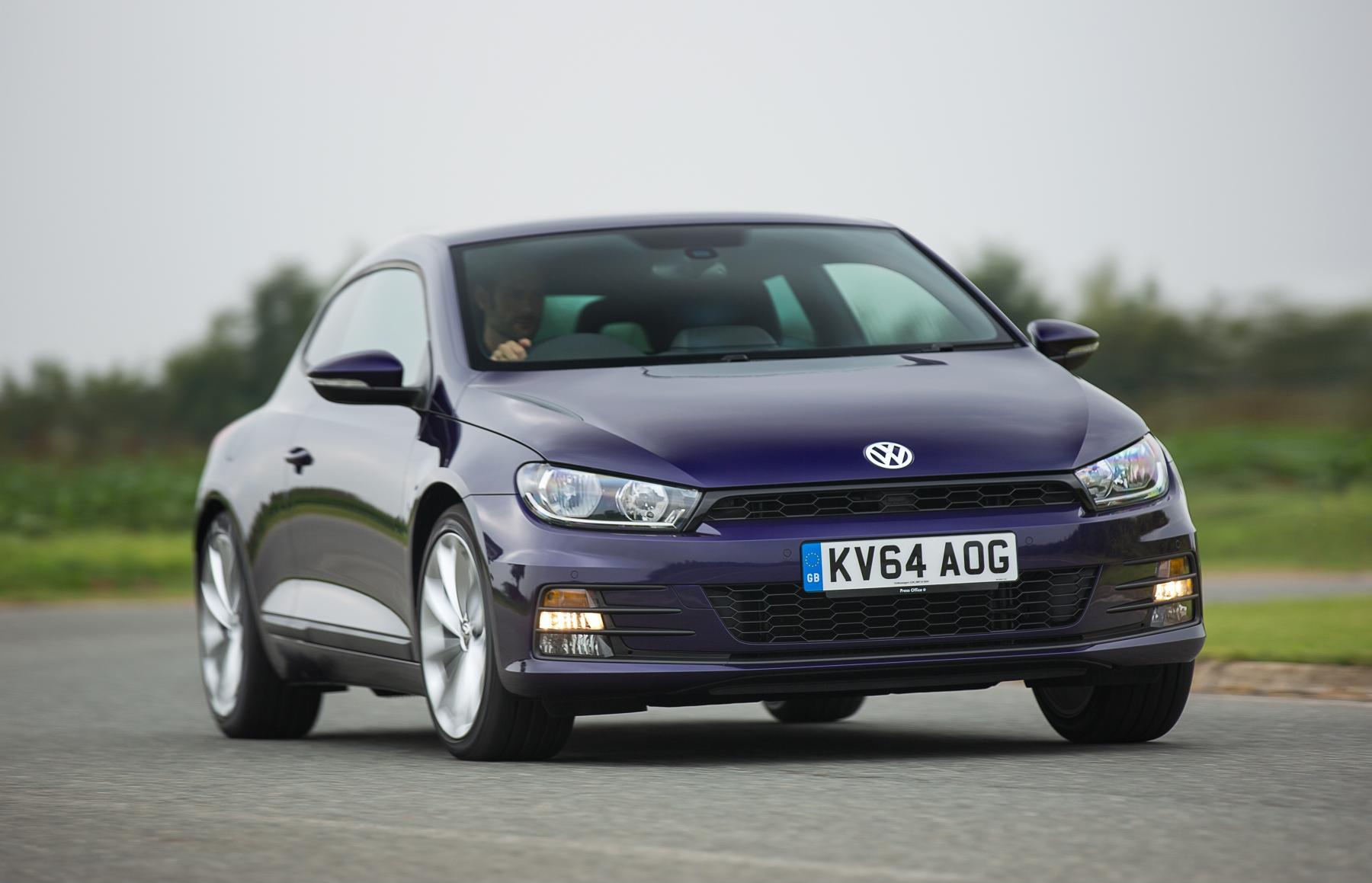 Coarse surfaces kick up some road noise and there's a bit of wind noise at motorway speeds, but the Scirocco is far from wearing on a long journey.

It has been said the Scirocco is a dolled up Golf GTI, which may contain an element of truth, but goodness me, that doesn't stop it being awesome. Actually, it's one of the most infuriatingly difficult cars to criticise. Even after all these years, it is remarkable complete in almost all areas.

The VW Scirocco remains a very good car and if your lifestyle is such that it can accommodate a smart-looking two-door, front-wheel-drive coupé, then perhaps it's time to think about it before they all go. Who knows, given the Scirocco's rather circuitous history, there's always a possibility it'll resurface sometime down the line.