When the second-generation Peugeot 308 was introduced back in 2013, it became an instant hit – so much so that it won the European Car of the Year award the following year. It followed in the footsteps of the Peugeot 306, 307 and 309 models, a series of underwhelming and bloated family cars, and added a new level of perceived quality for the French car maker.

It exhibited a far more stylish exterior look with a sleek, modern design with a sporty edge. Inside, the 308 had a classy, minimalist look that ditched most of the buttons and switches in favour of a touchscreen system that controls all of the major functions. 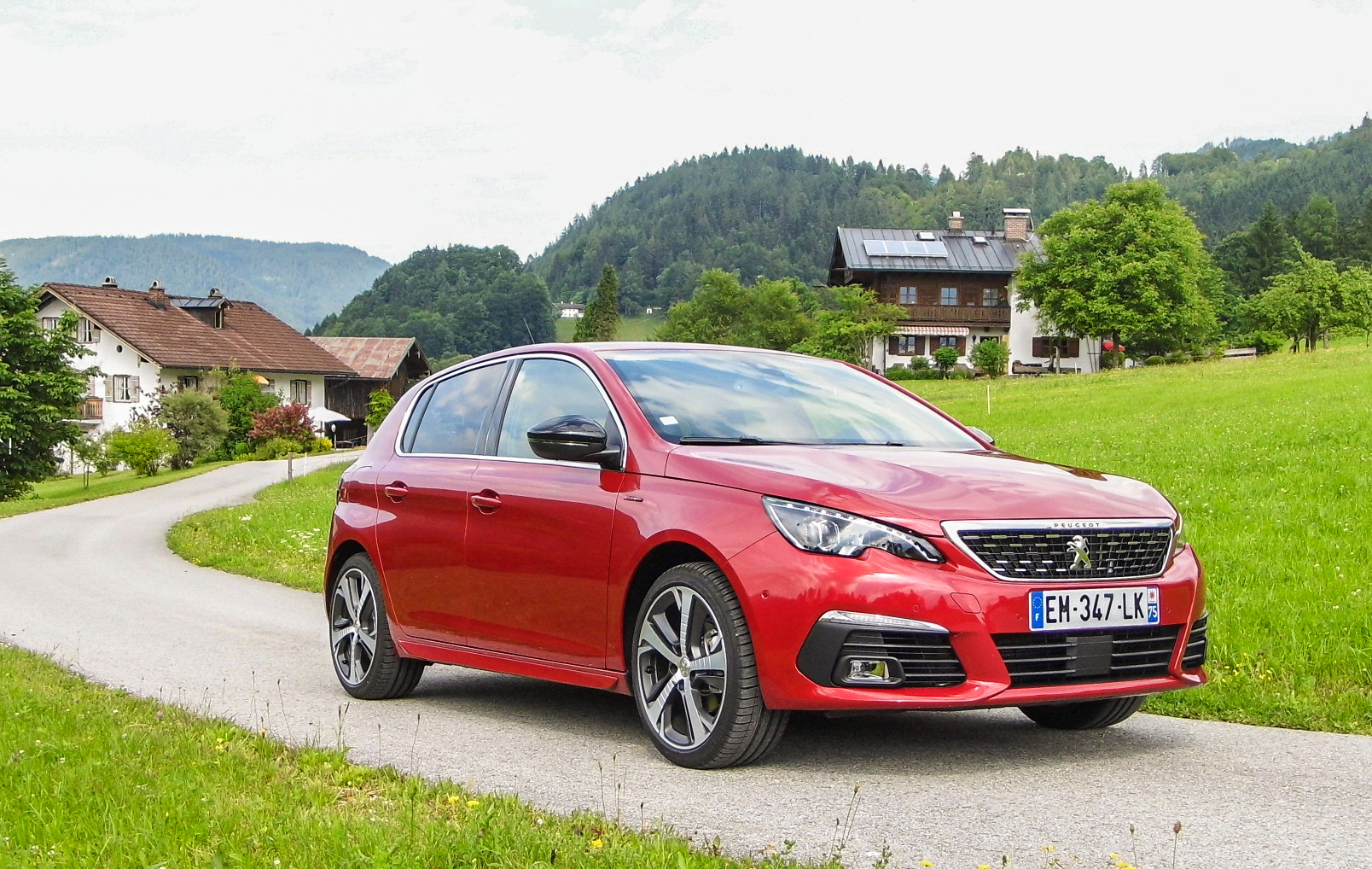 With the automotive world being a cyclical business, the Peugeot 308 hatch and estate underwent a recent refresh and I popped over to Klosterhof in Bavaria for the UK/EU media launch to inspect the changes and drive the tweaks Peugeot have introduced on the 308 for its 2017 model year.

Compare the pre- and post-facelift versions of the 308 without parking both side by side and you'll be hard-pressed to tell the difference, reflecting the general success of the car's original 2013 design.

Exterior enhancements on the 2017 Peugeot 308 include a new bonnet and front bumper design, scrolling indicators and a new, upright grille that now feature the famous Peugeot lion. New front daytime running lights are now matched at the rear with the now-LED claws lit permanently when the vehicle is running. All models except Active and GTi feature a panoramic roof which drenches the cabin in natural light.

Inside, the multimedia touchscreen has been tweaked to make it more responsive, while on-board tech has been upgraded – notably, the adaptive cruise control now has a braking function – and all models are fitted with TomTom satellite navigation as standard. 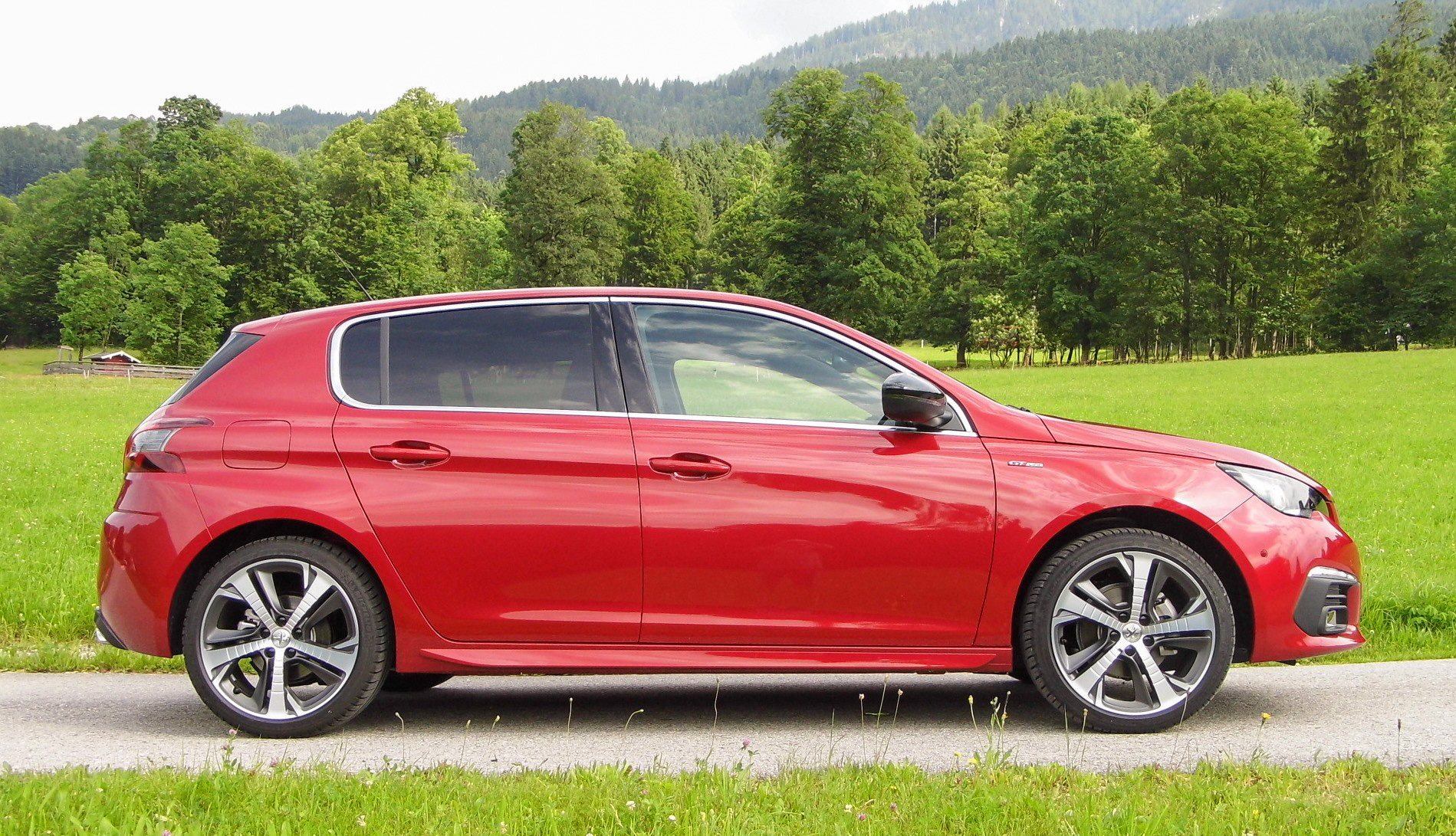 From the outside, the 308 seems restrained rather than racy, and that theme continues inside, where the focus is on build quality and comfort. Peugeot has given the 308 a high-quality interior that's modern and stylish in design. Interior materials have a premium feel and look and fit and finish seem right up there with its Germanic rivals. 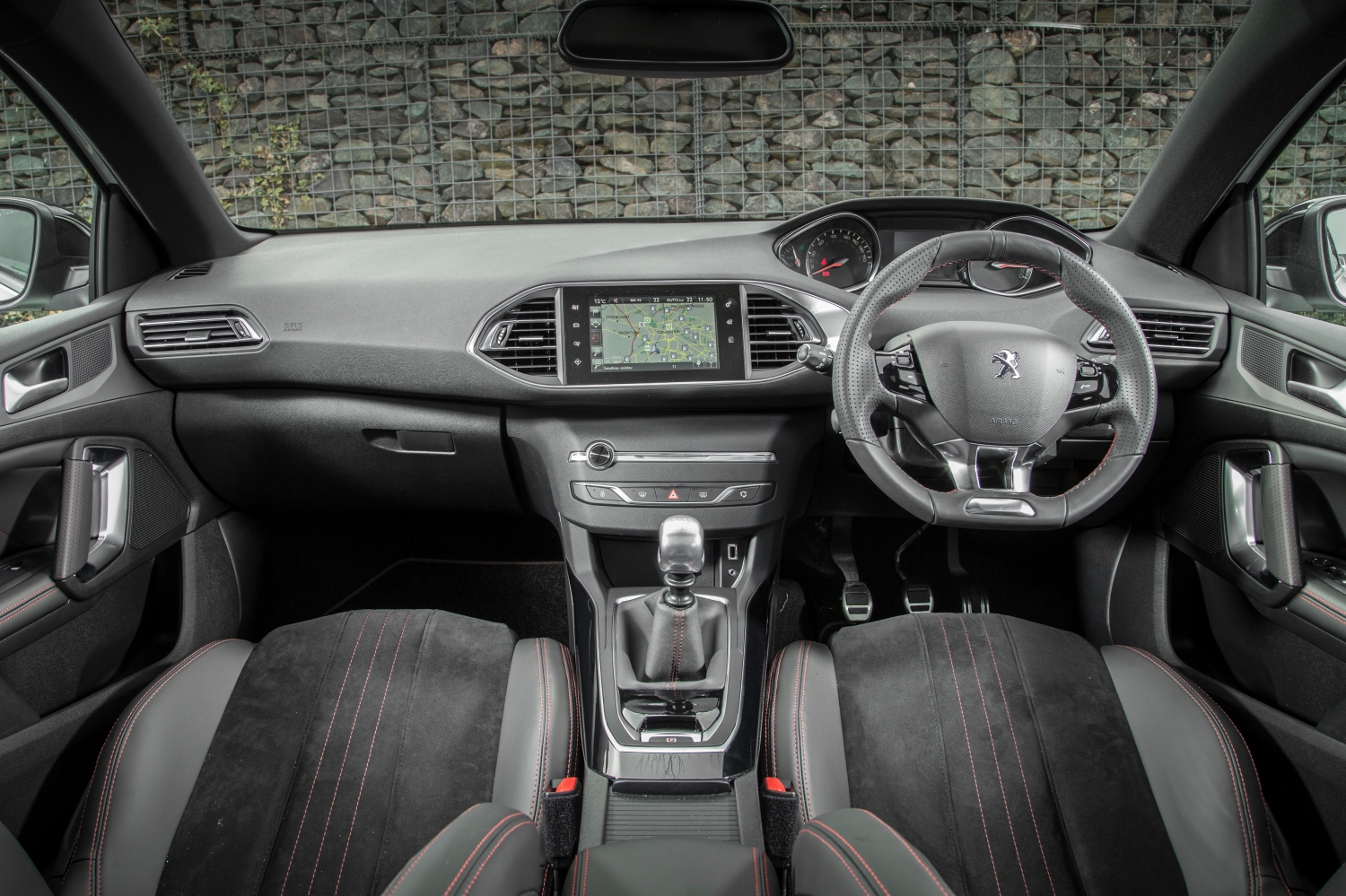 The dashboard has a couple of real highlights. The 9.7-inch touchscreen controls the navigation, radio and air-con, so there are very few buttons on the car's centre console, giving the interior a sleek, unfussy look. The instruments are novel too with the rev counter operating anti-clockwise, while the speedo operates in a conventional, clockwise direction.

It's part of Peugeot's unusual i-Cockpit design. Along with the central touchscreen, i-Cockpit includes a small, flat-bottomed steering wheel and high-set dials that, Peugeot says, mean you don't have to take your eyes off the road for too long. Four years on and the odd layout still garners mixed opinions, but I rather like the setup and could easily live with it on a daily basis. 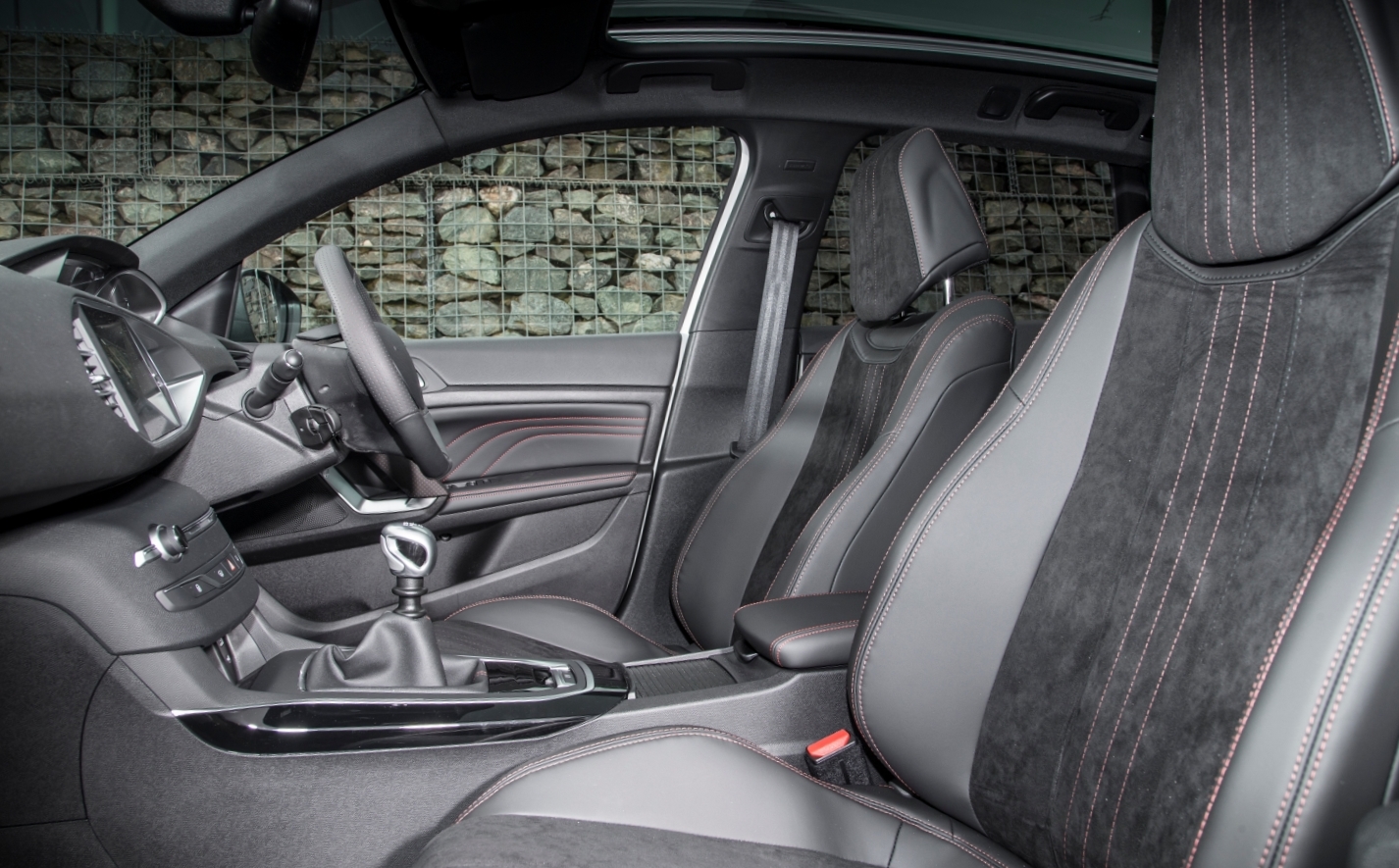 In the centre of the soft-touch dash are some handsome details, such as the sleek centre console surround and fancy air vents – but there are very few buttons. Everything, including the heater and stereo controls, has been centralised in the high-resolution touchscreen in the middle. This, I am not in favour of as the necessary degree of distraction is too high as to compromise safety while driving. 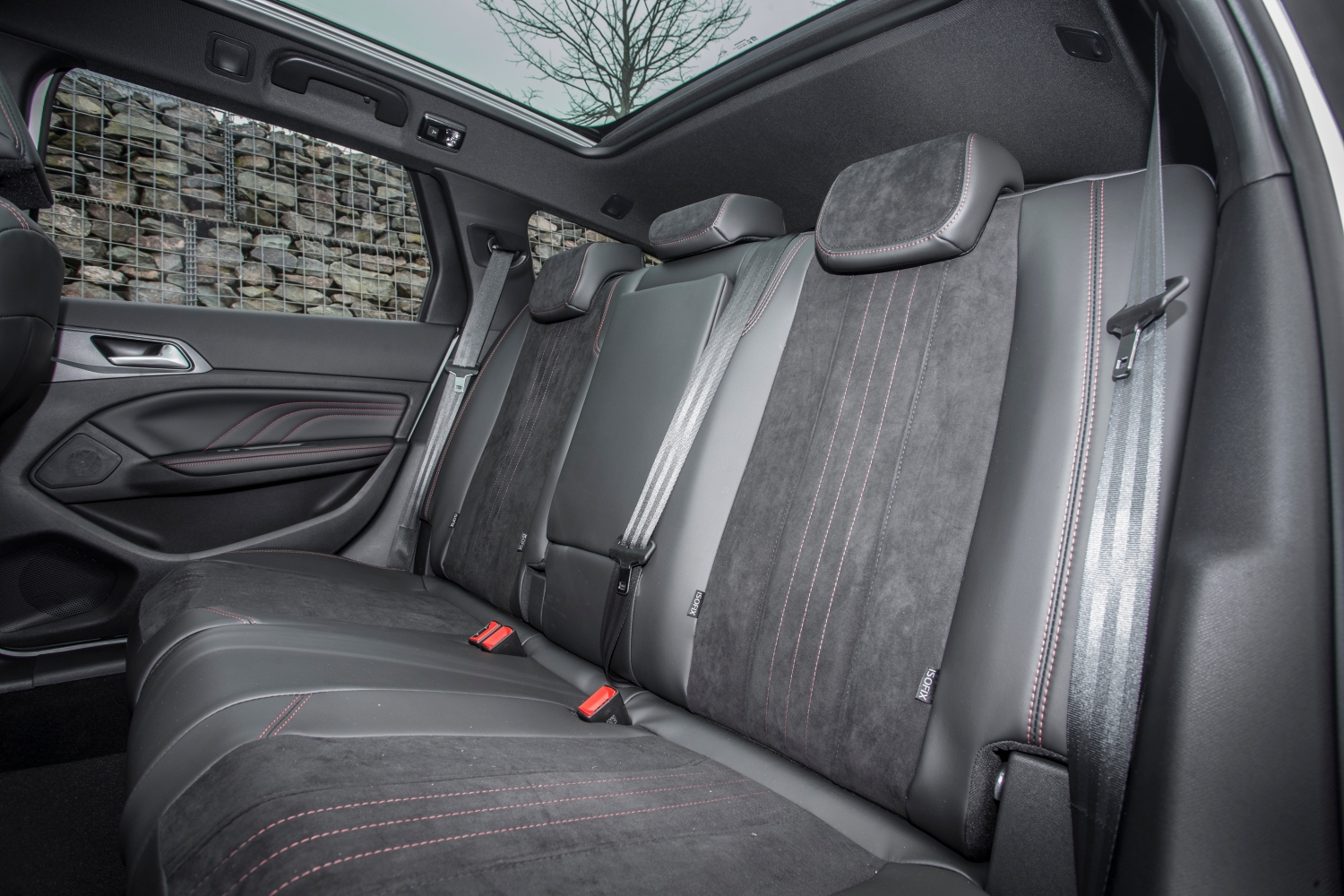 Two or three touches just to change the heater temperature or fan speed is fiddly at first and the system is not as sensitive as it should be but nonetheless, is nicely presented and gives the 308 a hi-tech feel. 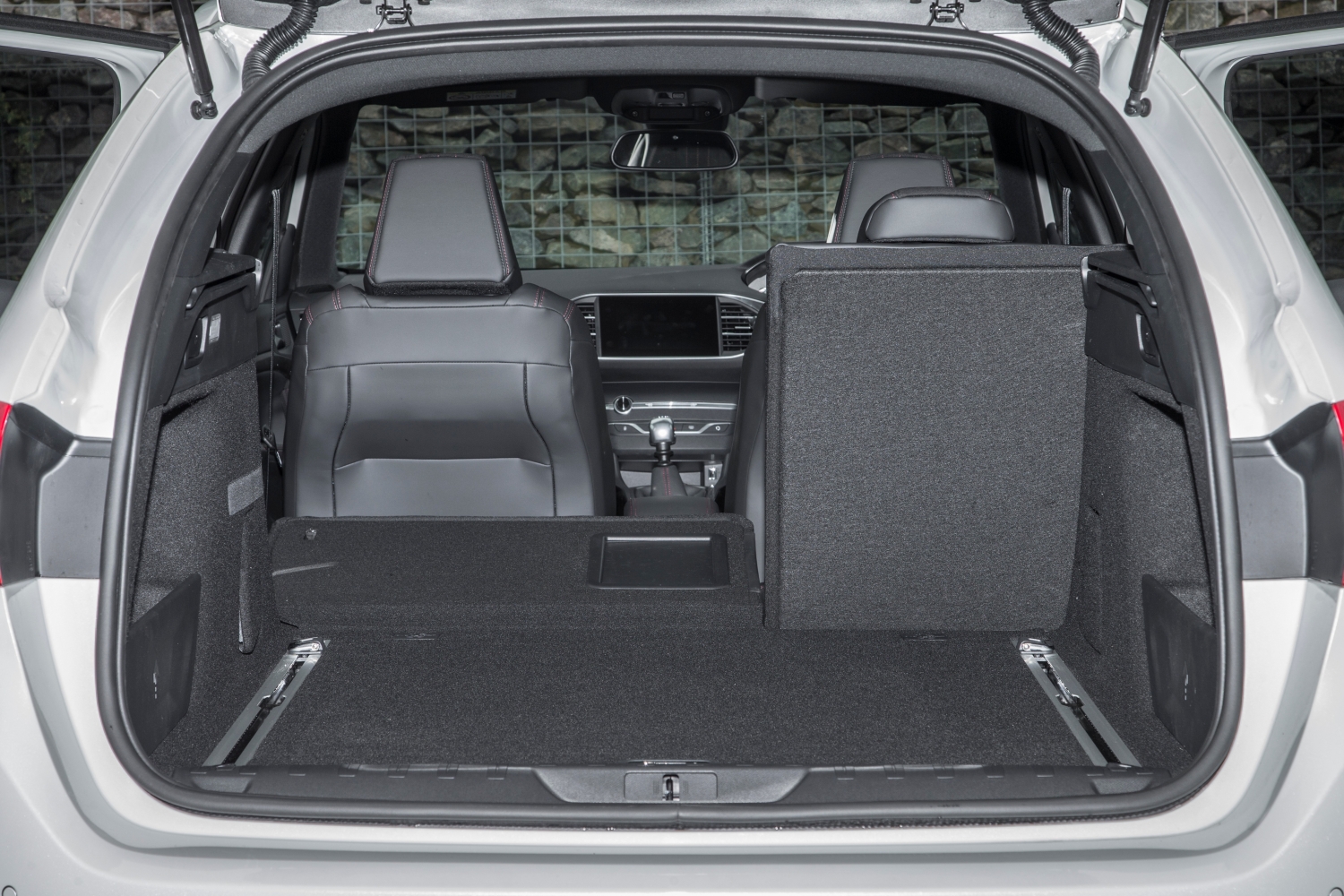 All versions of the 308 are well equipped and this time round there is no base Access trim. The range walk-up now starts with the Active model, followed by Allure, GT-Line, GT and hot-hatch GTi which is more than worthy of the GTi badge it wears. 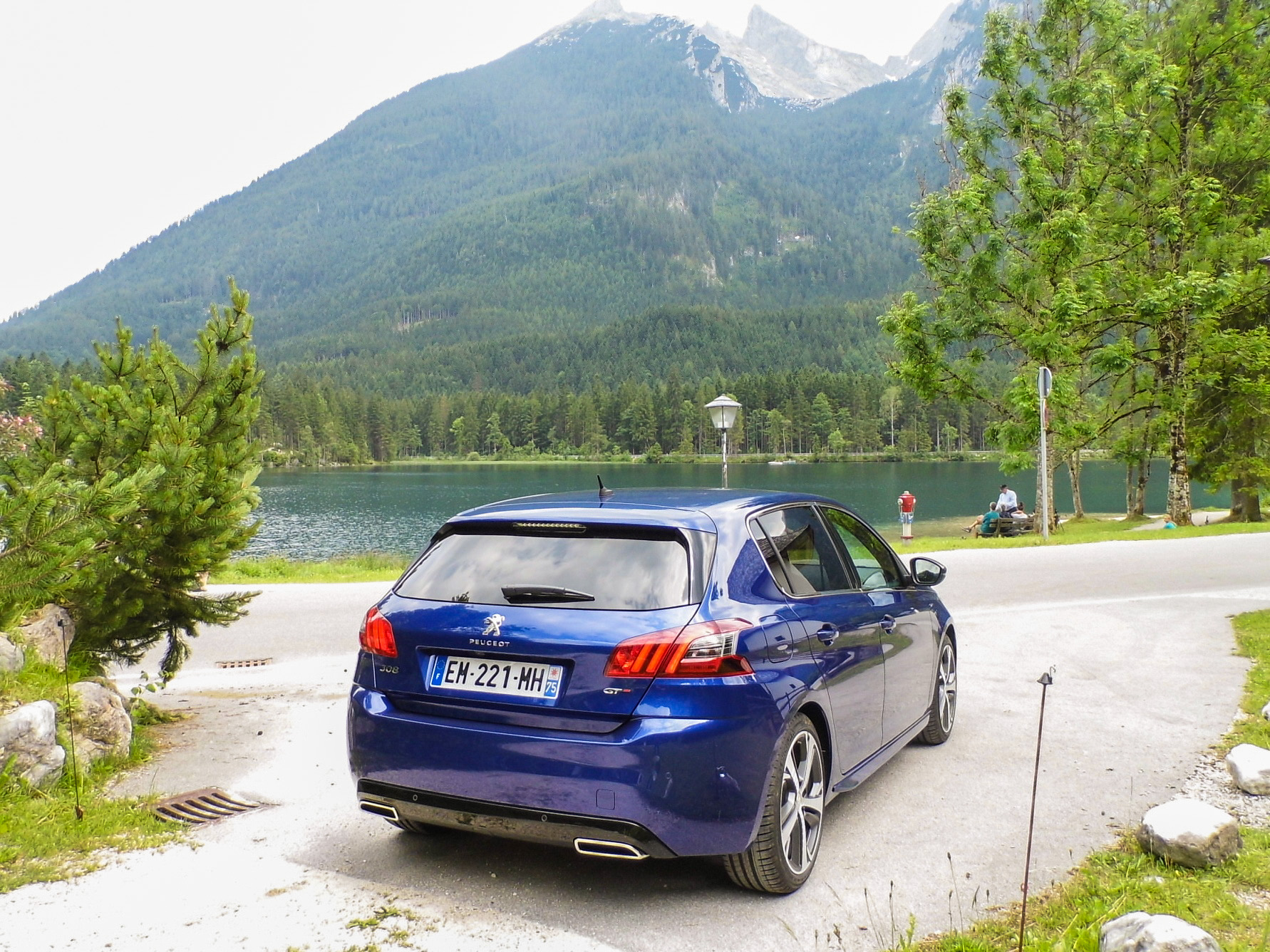 Continuing the trim-line walk up to GT adds keyless entry with start/stop button, driver sport pack (press its sport button and the steering is heavier, the throttle sharper and the dials turn from white to red. It also has a Driver Assistance Pack with autonomous emergency braking and radar cruise control), Alcantara and leather effect furniture, 3.5-inch GT instrument display panel and lower ride height (7mm front and 10mm rear). 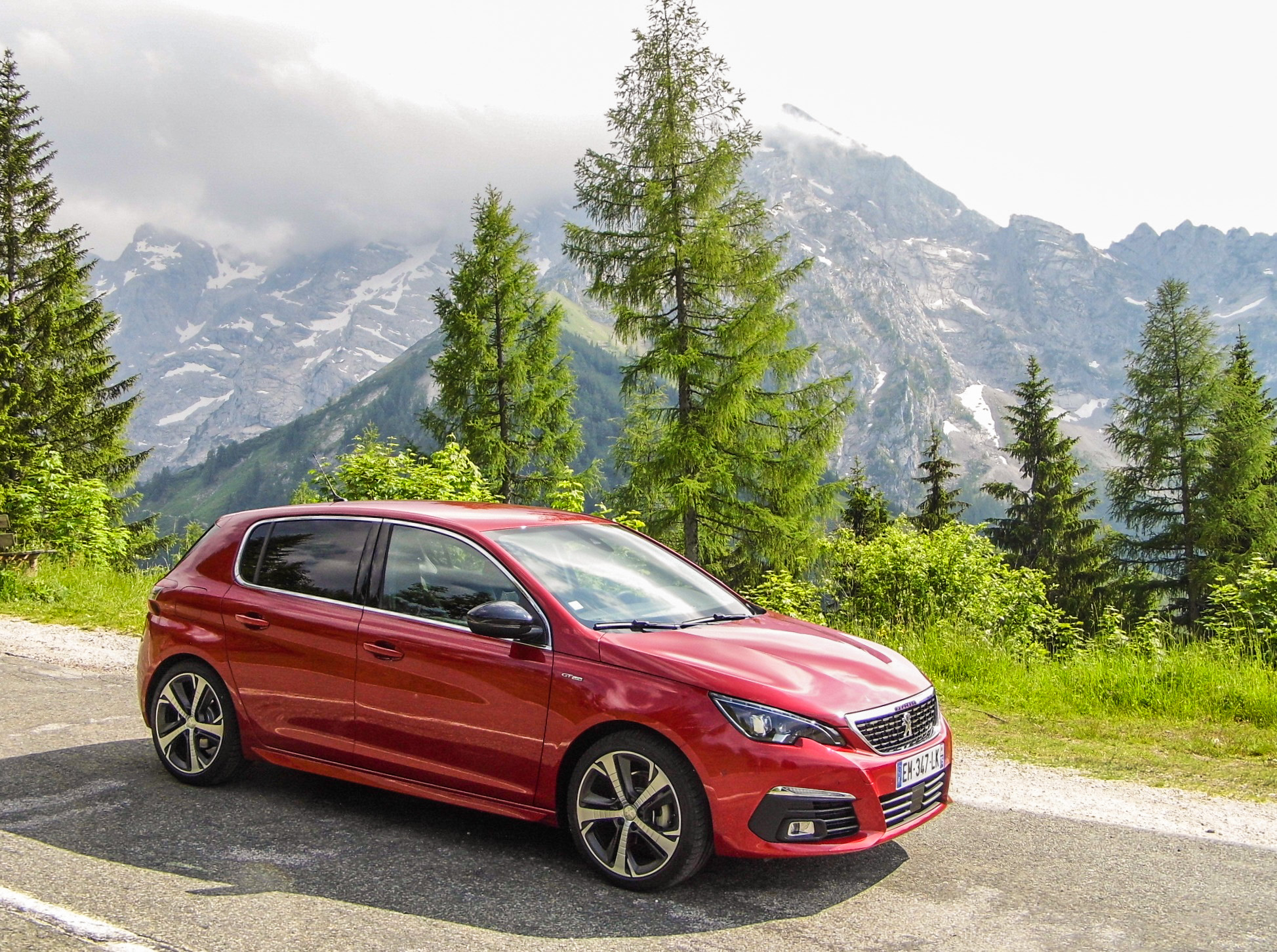 The basic four-pot 1.2-litre petrol has been phased out, which is good news because the two hi-tech, three-cylinder 1.2-litre PureTech petrol engines are a better bet, especially if the car is regularly undertaking longer journeys. They offer better performance, going from 0-62mph in 11.1 seconds (PureTech 110) and 9.6 seconds (PureTech 130). 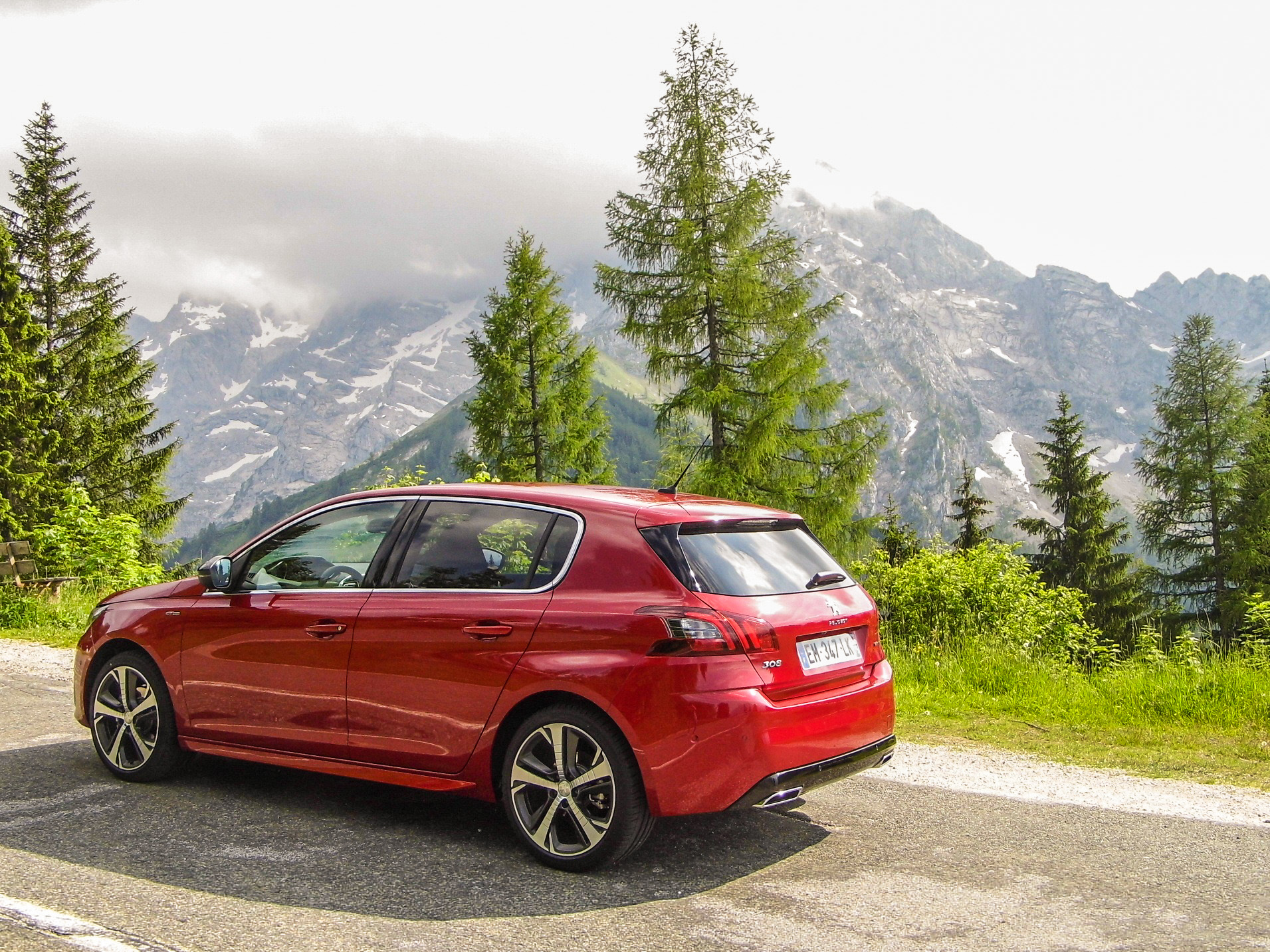 On the diesel front, all BlueHDi units are turbo-charged. The excellent 1.6-litre 120 diesel can get the 308 from 0-62mph in just 10.3 seconds, despite being capable of more than 90mpg. From November 2017 production, this engine is being replaced by a compact 1.5-litre BlueHDi 130 version which feels similar to the 1.6-litre, with impressive mid-range power and flexibility, but refinement has improved slightly, with fewer vibrations. 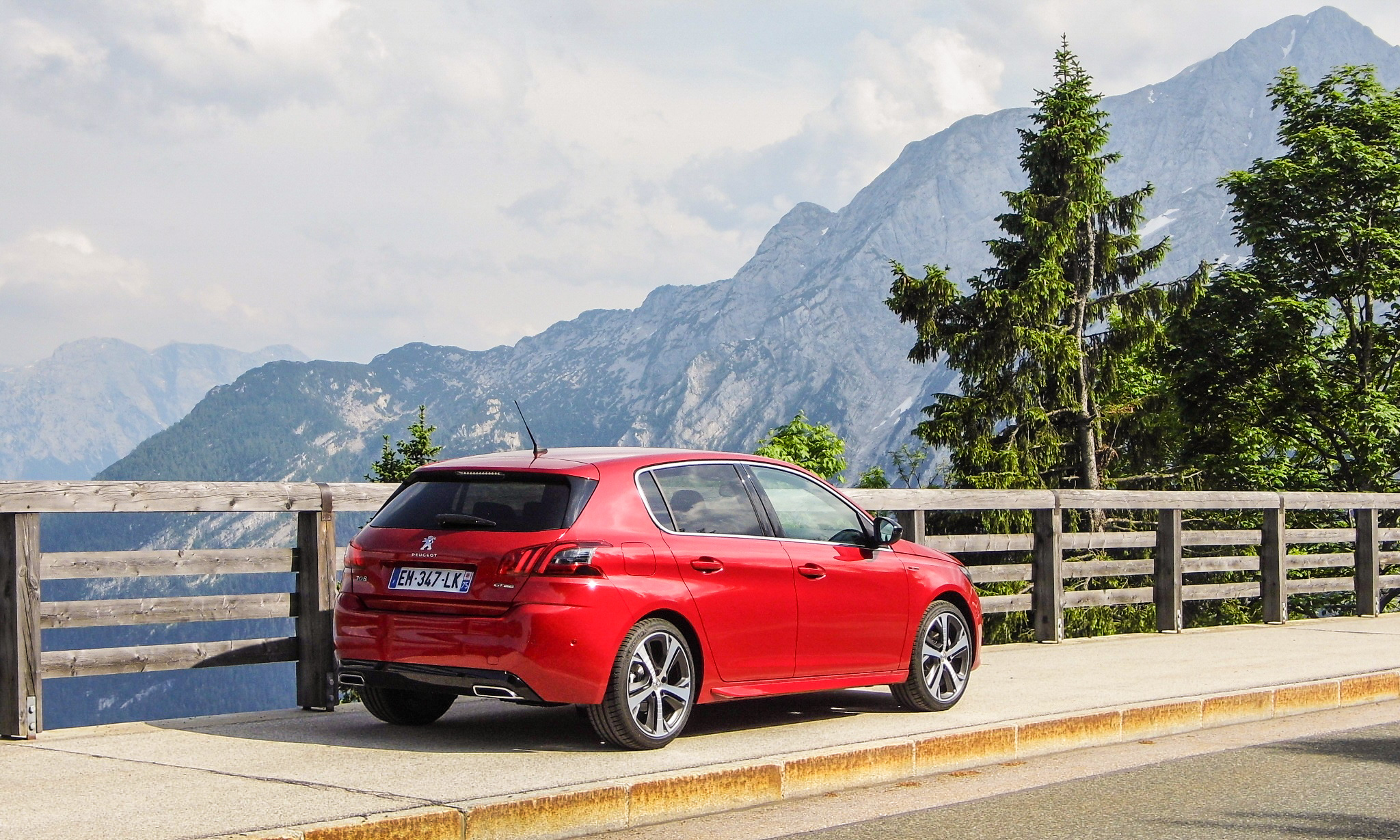 If impressive performance with strong efficiency is what you're looking for, then the 2.0-litre BlueHDi diesel engine is worth considering. It costs around £1,000 more than the 1.6-litre diesel, but the payoff is that it's quiet around town and has added performance, with 0-62mph taking just 8.9 seconds. Its mid-range surge makes it perfect for fast, safe overtakes on A-roads…and don't discount its towing capabilities, either.

Transmissions comprise of a mix of manual and conventional torque-converter automatics (no CVT's here, thank you!). Peugeot's more lower-powered petrol and diesel engines come with five- or six-speed manual 'boxes or super-efficient six-speed automatics, while the stronger GT-trimmed 2.0-litre 177bhp BlueHDi is only available with an eight-speed auto (there's that towing practicality again). Wisely, Peugeot Sport has opted only for the six-speed manual 'box on the hot GTi.

While the 308 is good fun to drive, Peugeot placed greater emphasis on it being more comfortable. As a result, it has supple suspension, but body control is on par with the best models in its class. The car's steering can feel unsettled on the motorway, though and you will feel the odd rear jiggle over sunken manhole covers.

A hugely competent all-rounder, the 308 does seem more at home in town, where its soft suspension is a distinct positive. If you're after sportier handling, opt for the GT model with its lowered suspension for better cornering and B-road agility. To be honest, it's surprisingly more compliant than you might expect and strikes a finer balance between comfort and handling. 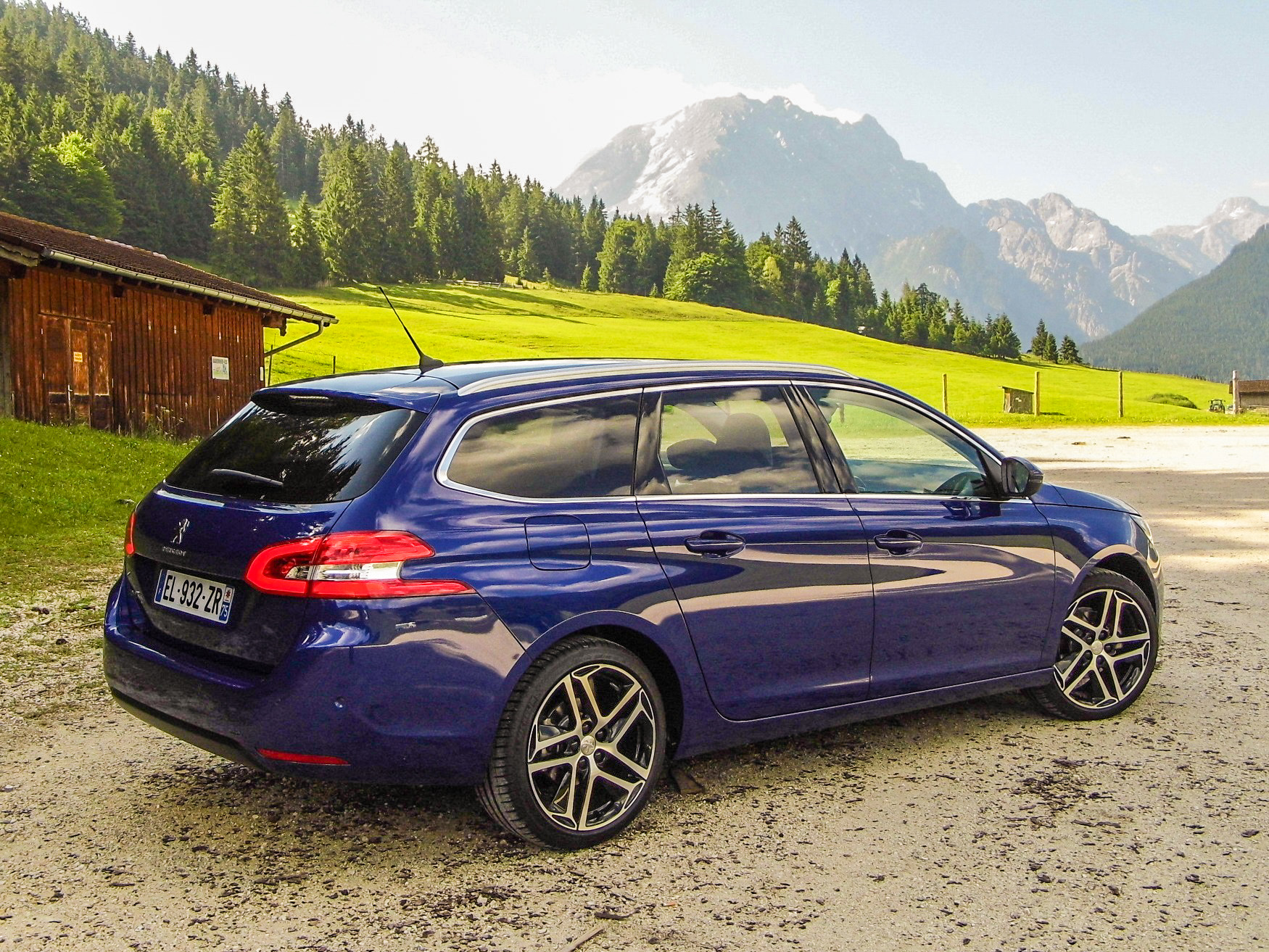 The revised Peugeot 308 has been boosted in a few key areas, with a more comprehensive array of safety tech, a more desirable look, and greater efficiency. If you're on the hunt for a family hatchback or estate then the Peugeot 308 needs to be on your list. A talented all-rounder and one of my favourite cars to drive, the 2017 is more than a match for the go-to choices of Ford Focus, Vauxhall Astra and Volkswagen Golf. 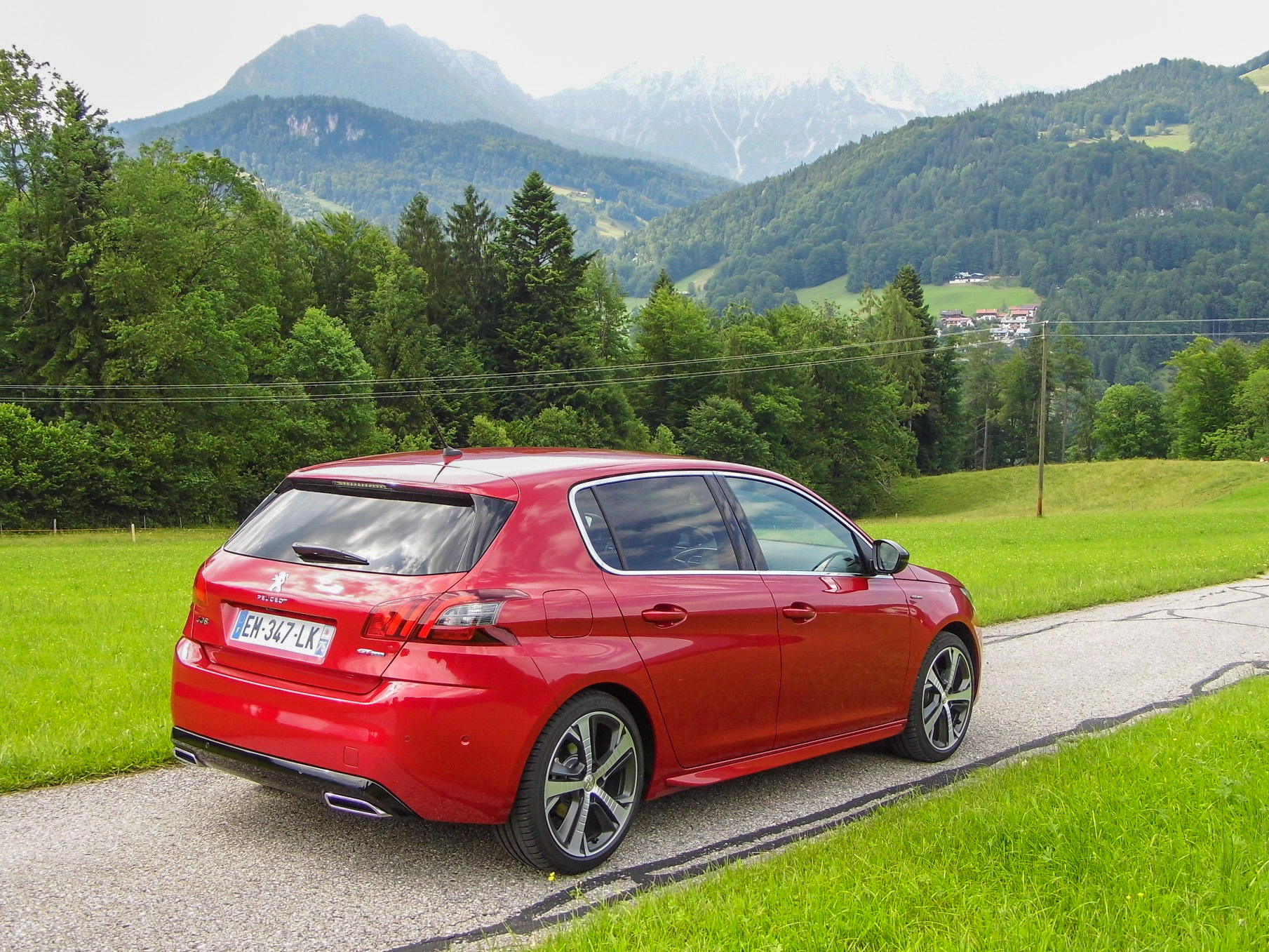