In my line of work, life isn't always about red Italian sports cars or six-metre long formerly-British luxobarges. Sure, there's a small place for them – that's why they exist. But, by and large, I prefer to get behind the wheels of more bread-and-butter motors, you know, the ones we actually buy and live with every day.

There are many worthy examples in the current A Segment city car line-up: There's the parts-sharing trio of Volkswagen Up, Skoda Citigo and Seat Mii, along with the Kia Picanto, Suzuki Celerio, Vauxhall Viva, Toyota Aygo and PSA's pairing of Citroen's C1 and Peugeot 108. And let's not forget the best latter-day retro by far, the cute Fiat 500.

There is another, though…and it's a very good one. Without it, Hyundai wouldn't be the force in Europe and the UK that it is today. I am, of course, referring to the Hyundai i10. 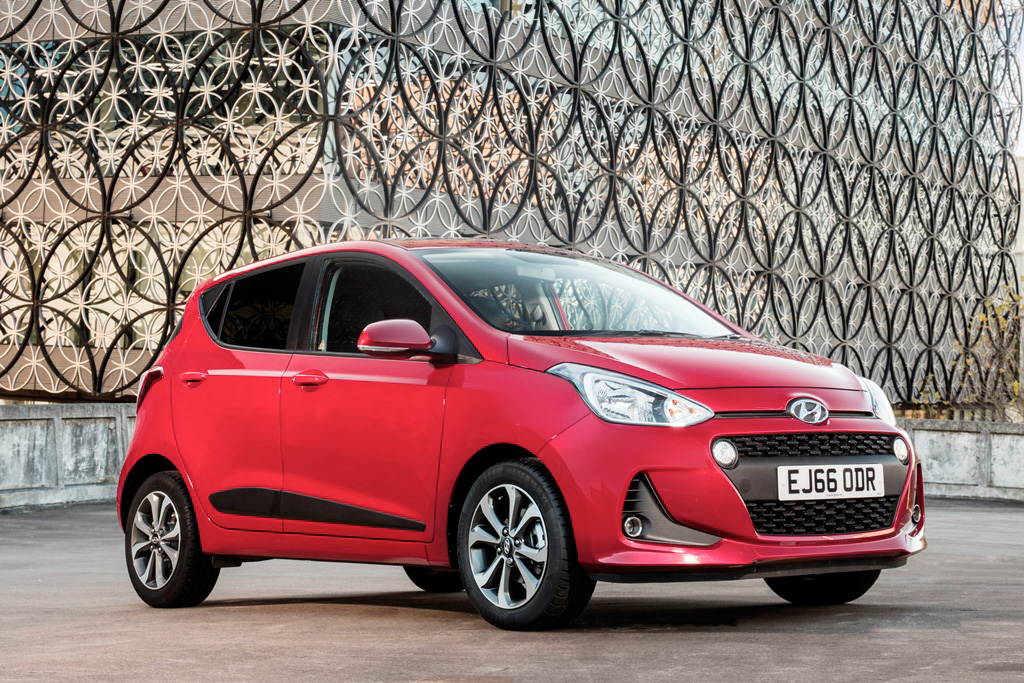 Developed as a replacement for the forgettable Amica (nee Atoz), the five-door i10 arrived just as the recession began to take hold in 2008. It is unlikely that the new i10 would eventually have become the UK's best-selling car, were it not for the original Government-backed scrappage trade-in scheme. To be fair though, the little i10 was in an altogether different league than its predecessors.

The second-generation i10 was introduced to the UK in 2014. It was given a makeover last year and changes included extra safety kit, a new seven-inch infotainment screen, Apple CarPlay and Android Auto smartphone mirroring systems. Outside, there's a new grille, LED day-running-lights, a new front bumper and a re-engineered suspension to favour greater comfort.

Recently, I had a welcome opportunity to reacquaint myself with the Hyundai i10 – but this time in base-level 'S' guise.

The i10 is one of the more conservatively styled city hatchbacks of its size, when compared with the bolder Citroen C1 and Toyota Aygo. It rides on an all-new chassis which, incidentally, is NOT shared with sister company KIA's Picanto. 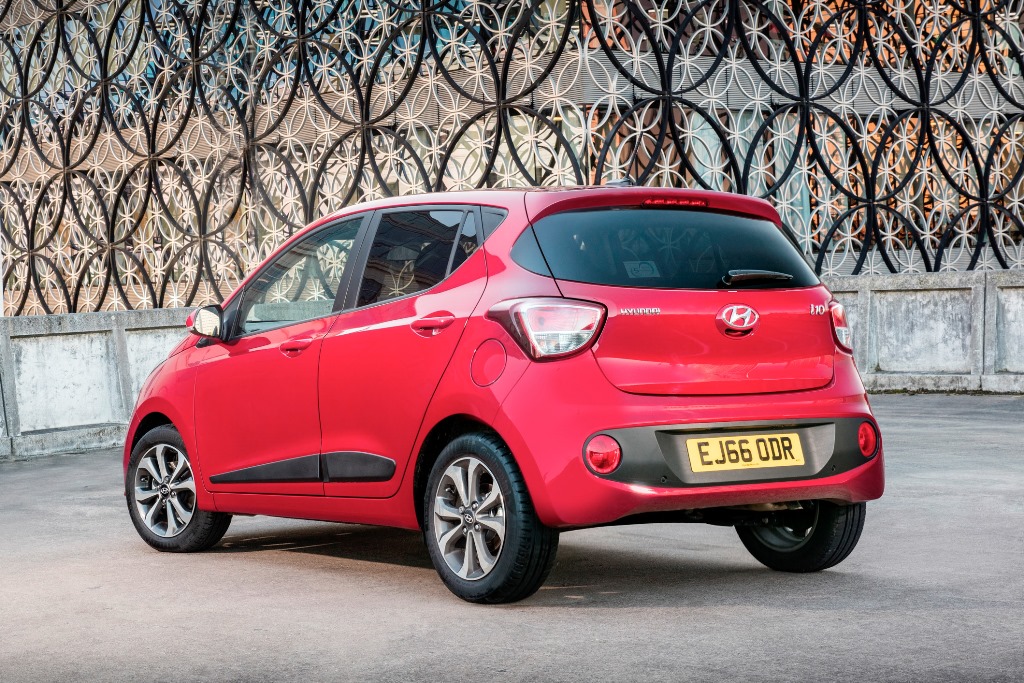 Its larger dimensions still say 'city car', but there's less cubism about the shape than previous. The roof is 4cm lower than in the outgoing i10, while the length is up by some 8cm to 3,665 metres, despite the wheelbase only increasing by 5mm. This is due partly to improved pedestrian safety offered by the new front bumper.

In the chosen 'S' trim, the i10 isn't overly exciting to look at with its 14-inch steel wheels and wheel covers, but the interior is a match for any class rival and there's plenty of space in the cabin.

The good news continues inside as Hyundai has worked hard in recent years to improve the interiors of its cars. Inside the latest i10 you'll find a smartly designed dashboard, impressive materials and excellent build quality. It's comfortably one of the best in its class with a good quality feel, no exposed metals and no visible screw heads. 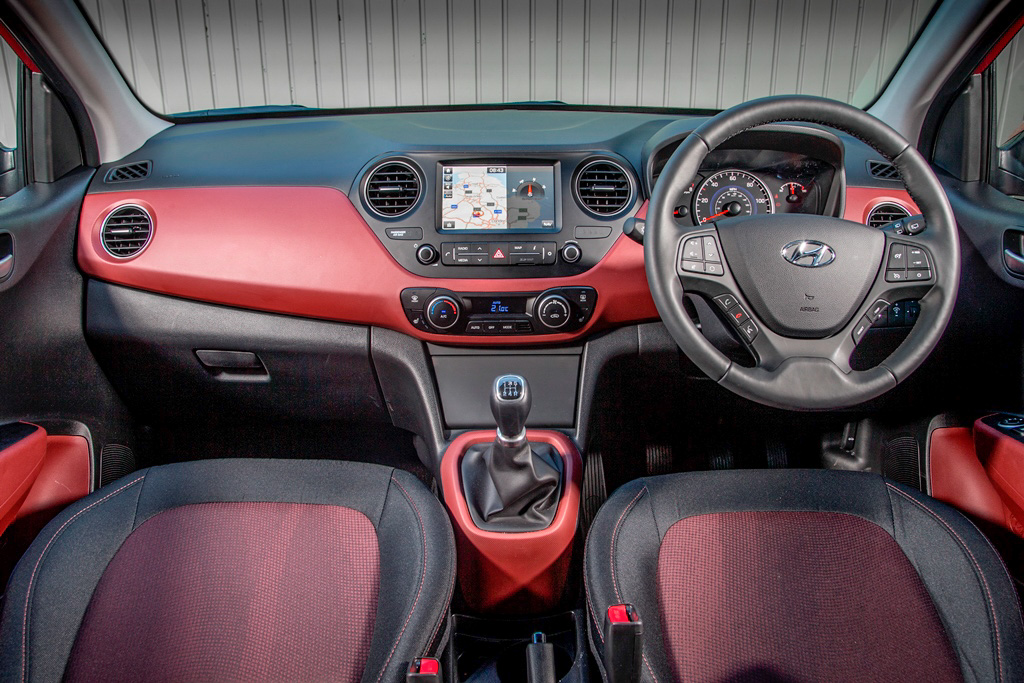 From behind the steering wheel it's hard to believe you're in a car that costs less than £9,000. Last year's update of the i10 means you can choose bright blue or red metallic-look finishes for the dashboard and gear lever surround – but these are not available on the S trim, which is a pity as they do add a splash of colour and character to the cabin.

The switchgear feels good and sturdy you don't feel short-changed on passenger space, although the drive position is slightly higher and more 'sit-up-and-beg' than you would find in some rivals. All i10 models get a height-adjustable steering wheel, but no reach adjustment available across the range. SE trim grades and above get driver's seat height adjustment (not available on the S as tested). Both head room and knee room are good up front, equally so in the second row, which accommodates grownups more comfortably than most city cars. 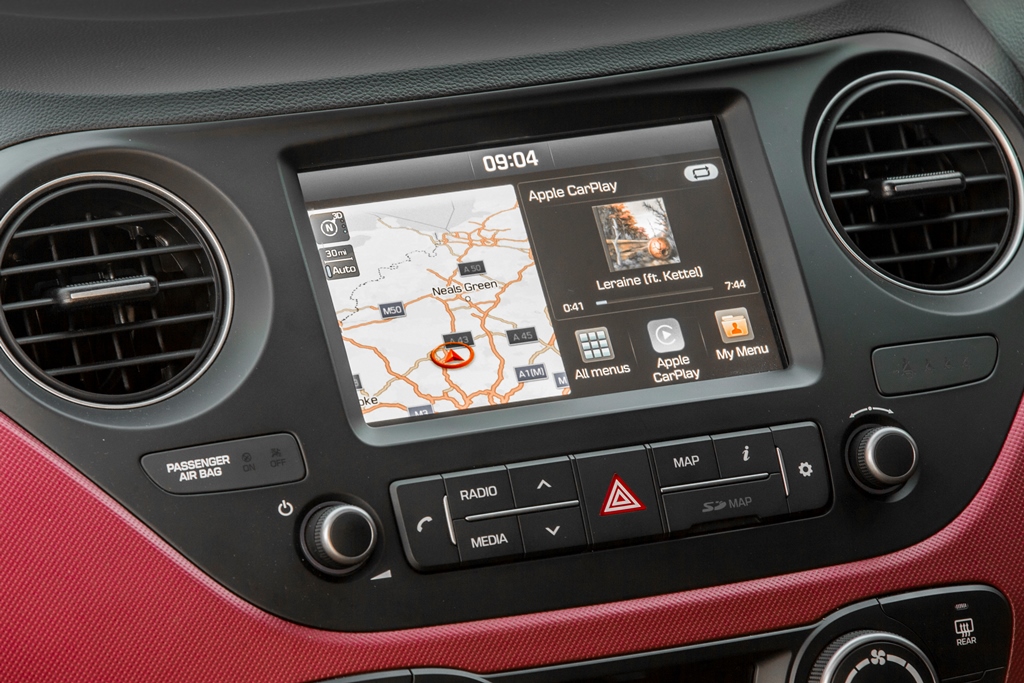 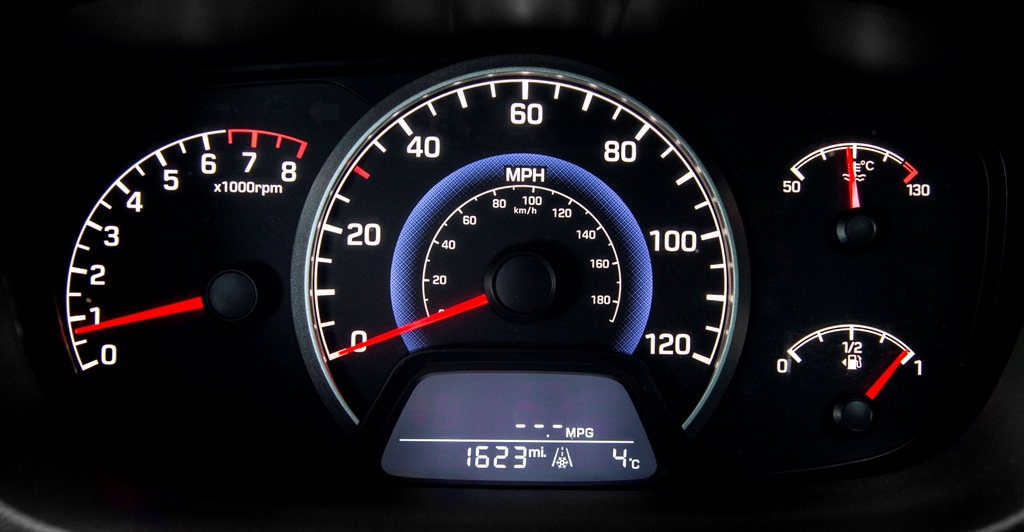 It's also pleasing to find so much oddment storage in such a small car: good-sized cup holders, bottle holders in the front doors, large centre tunnel cubbies for both rows and a good-sized glovebox. The boot is a decent size for the class at 252-litres, expanding to 1,046-litres with row two lowered.

There are four trim grades available on the current Hyundai i10: S, SE, Premium and Premium SE. The 'S' as tested is rather spartan, if I'm honest, with some basic kit available from only the 'SE' upwards. 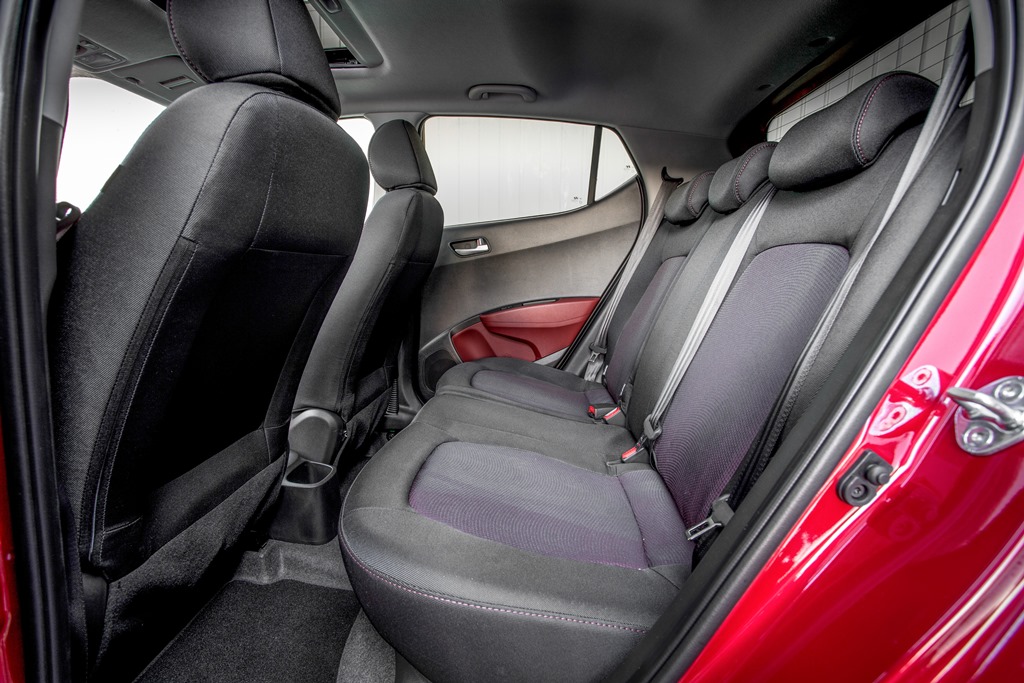 'Premium' cars include a leather steering wheel and gear lever, 14-inch alloy wheels, LED daytime running lights and a smartphone docking station. The new i10 saw the introduction of a seven-inch touchscreen infotainment system to the 'Premium SE' model, which comes with satnav, DAB radio and Apple CarPlay and Android Auto technology. You also get a free seven-year subscription to real-time traffic data.

The Hyundai i10's compact dimensions and light weight make it feel very nippy, particularly when you're navigating tight city streets. There's no diesel option in the engine line-up but the two petrols each have just enough poke and torque to make decent progress.

The smaller, naturally-aspirated 1.0-litre, three-cylinder engine is of course slower, and occasionally requires some forethought prior to overtaking or tackling a steep hill. It produces just 65bhp and takes a tad under 15 seconds to get to 62mph from a standstill, which is roughly the same as the equivalent Skoda Citigo. 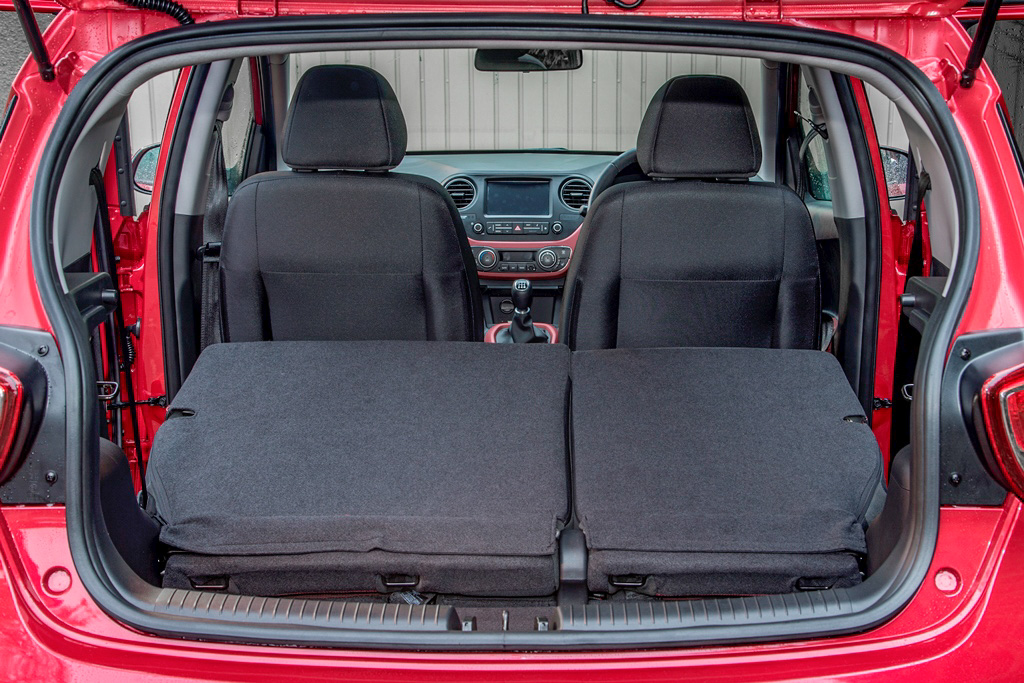 The 86bhp, four-pot 1.2-litre engine is the choice if you're spending a lot of time on the motorway. It does 0-62mph in a quicker 12.3 seconds and feels more comfortable at higher speeds.

It's a pity that Hyundai has yet to introduce a small turbocharged engine to rival the engines in alternatives, such as the 1.0-litre engine in the Volkswagen up!, as they generally don't need to be worked as hard and aren't any less economical.

As intimated, those recent updates included some improvements made to the car's running gear, with new suspension components fitted to help it cushion passengers from urban lumps and bumps. The steering was also improved to make it more accurate. The i10's greatest appeal lies around town where the combination of high driving position, excellent visibility and light controls makes driving and parking a breeze. However, I did find the brakes a tad snatchy, but you quickly get used to them. 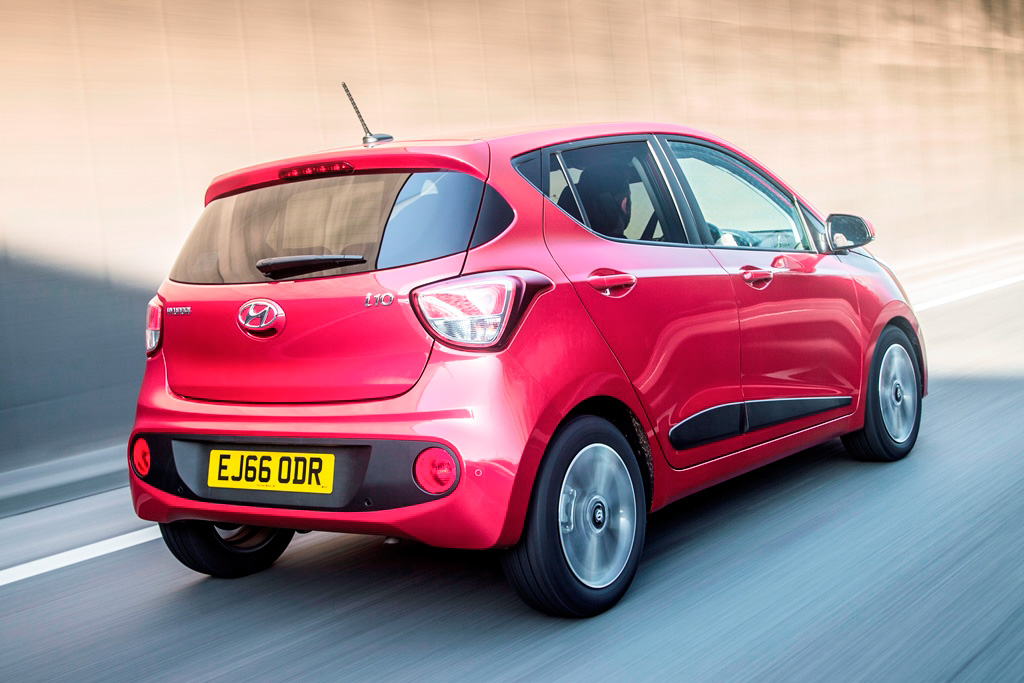 The i10 only weighs 933kg, so the available 65bhp and 95Nm of torque doesn't sound like much, but it's just enough to get you up to speed, helped by a slick-shifting five-speed manual gearbox. Unless you absolutely have to have to the optional automatic, it is best avoided. It's an ageing four-speed 'box and not a good example of its ilk.

The power-assisted steering is direct and accurate and grip is surprisingly good when pressing on, making the i10 feel composed and capable through a series of corners without excessive body lean. When you do venture onto the motorway, the i10 feels stable at higher speeds and isn't too badly influenced by crosswinds.

The little 1.0-litre engine is exceptionally hushed for a three-cylinder – even quieter than the four-pot 1.2 much of the time. By city car standards, the i10 is excellent at shutting out wind and road noise and makes the little Hyundai a very pleasant car to drive.

The Hyundai i10 is a perfect example of a car that makes you question whether you really need anything bigger. The Volkswagen up! is more enjoyable to drive with a classier interior, but the Hyundai i10 costs less, is quieter and more spacious. If you're looking for a small, neat and practical car and don't want to spend a lot of money, there's (still) nothing better.

No wonder Hyundai are smiling like the cat who got the cream.

➤ Check out our current Special Offer for the Hyundai i10 S right here! 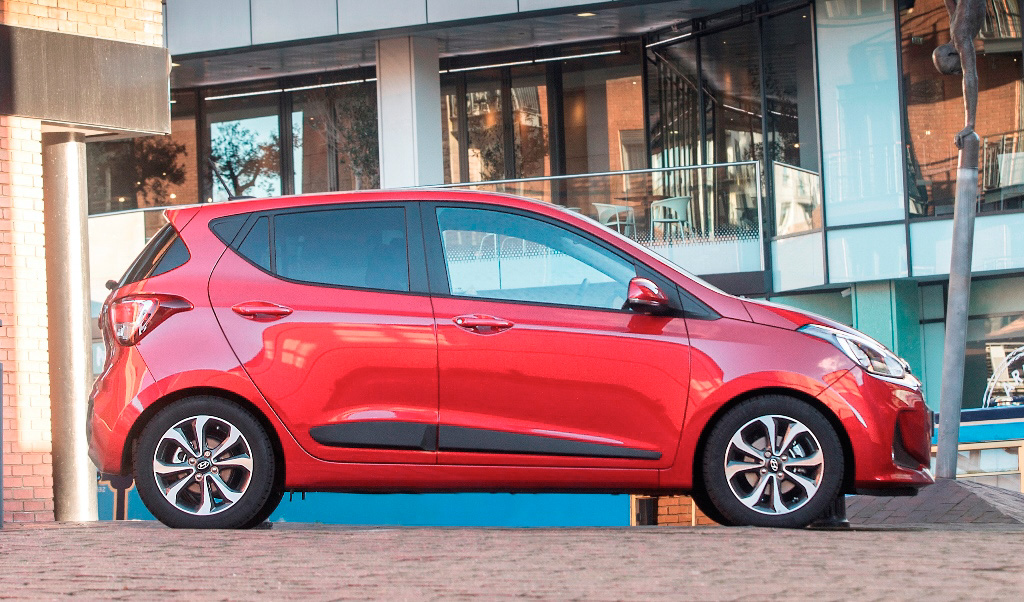