Since succeeding the Vectra, Vauxhall's Insignia has been a popular car for British buyers from its introduction in 2009. During the intervening years, over 730,000 Insignia sedans and estates have been produced, with the UK – the car's largest international market – absorbing around 240,000 of those.

Designed by Brit Mark Adams, the Vauxhall Insignia Grand Sport – the subject of our test this week – is built at Opel's plant in Rüsselsheim, Germany. 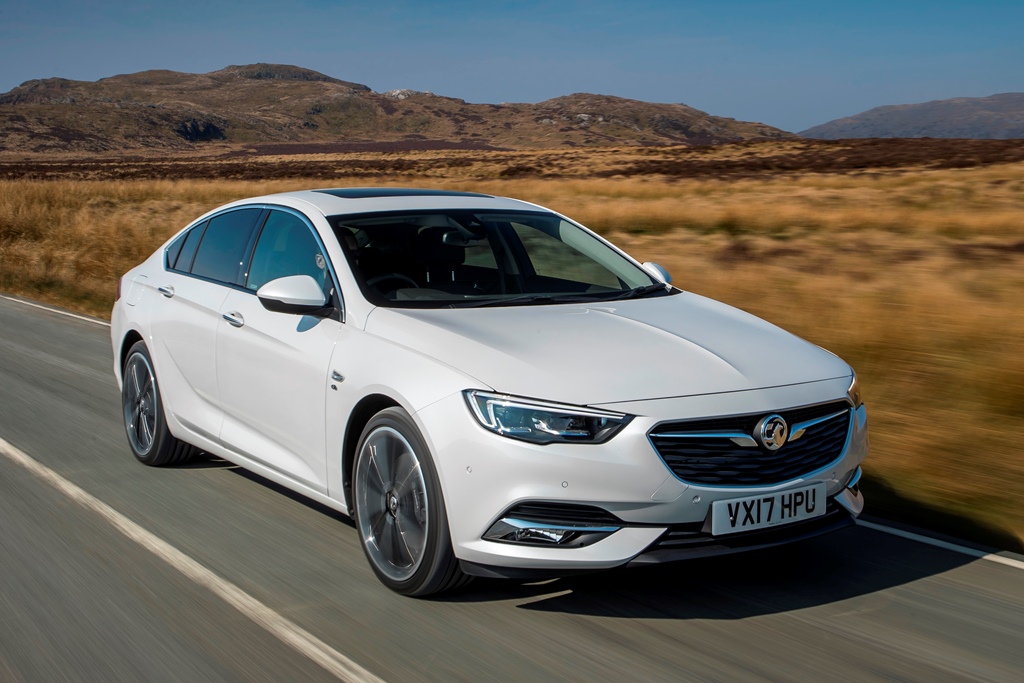 Inevitably though, the first thing you notice about the new Insignia Grand Sport is its larger size. Thanks to that new E2XX platform, it's bigger all round with a 55mm longer body and 92mm longer wheelbase and, at 4.9 metres long, Vauxhall says it has 'sorted' the leg, head and shoulder room issues of the outgoing Insignia sedan.

Up front of the Insignia Grand Sport there's a new iteration of Vauxhall's grille and upper-trims have the all-new IntelliLux LED matrix headlights which feature 32 lighting elements offering smoother transitions between lighting patterns to suit driving conditions. It's fascination to watch the tech at work when driving at night. 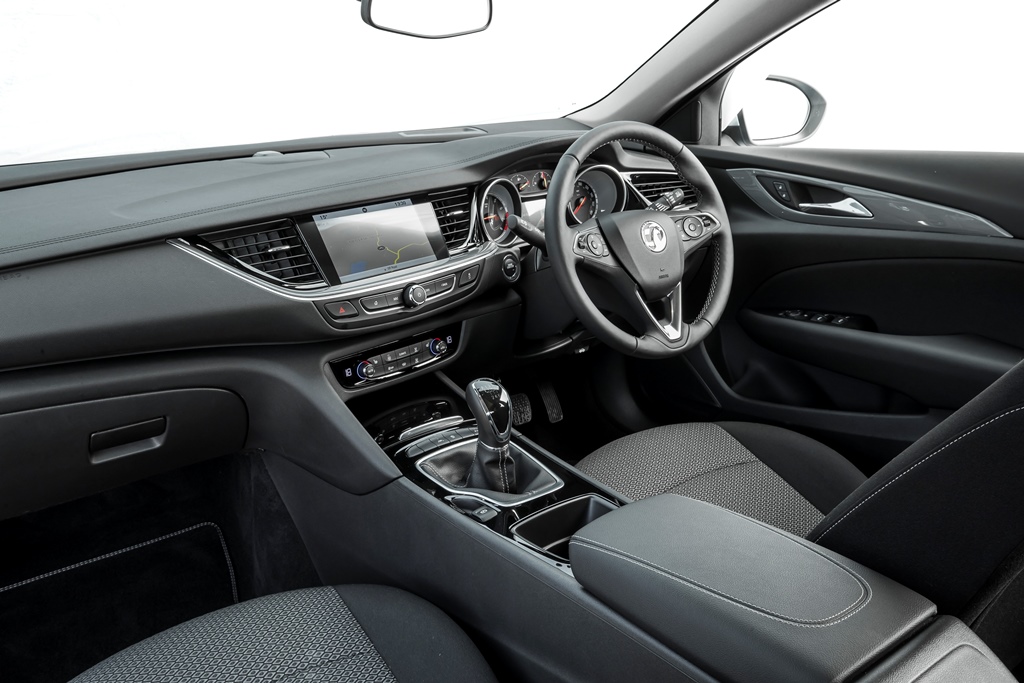 The interior is much better than before in terms of material quality and the dashboard has undergone a comprehensive decluttering this time around, although there are still proper, intuitive switches for important things like the heating and ventilation and the audio system.

Inside, it's light and airy and the cabin looks a lot more upmarket now – more so if you opt for the larger digital display behind the wheel. Both the rev counter and fuel gauge are physical instruments but the speedo is a neat, customisable graphic version with a large numerical display. Retained from the outgoing Insignia is the steering wheel, still festooned with buttons as before. 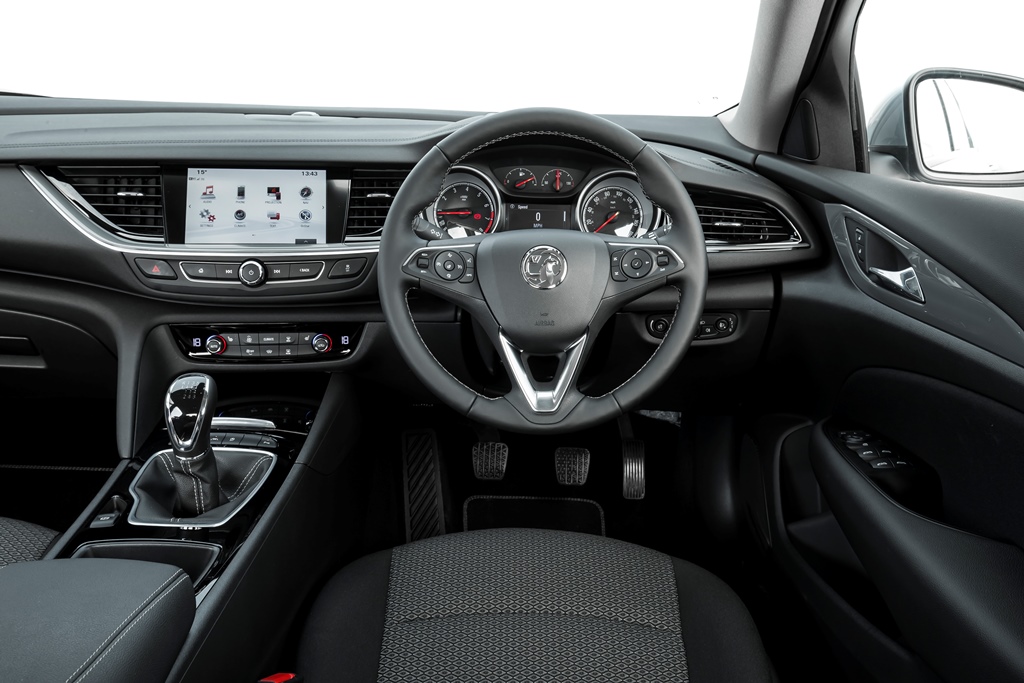 As you would expect in a mile-muncher of this calibre, front and fear furniture is very comfortable and settling into a cosseting driving position is easy thanks to the highly adjustable seat and steering wheel.

Another thing you'll notice inside is how quiet things are when on the move. I drove both petrol and diesel variants at last year's media launch and both were impressively well hushed and make the new car a quiet and relaxing place to spend a long journey, which of course is the Insignia's raison d'être.

As with most big sellers in the automotive world, the range of trims and specifications on the all-new Insignia is expansive. The current nine-model range includes Design, Design Nav, SRi, SRi Nav, SRi VX-Line Nav, Tech Line Nav, Elite Nav and GSi Nav versions. In addition, there are 'Black' and 'Chrome' spin-offs from a couple of those. 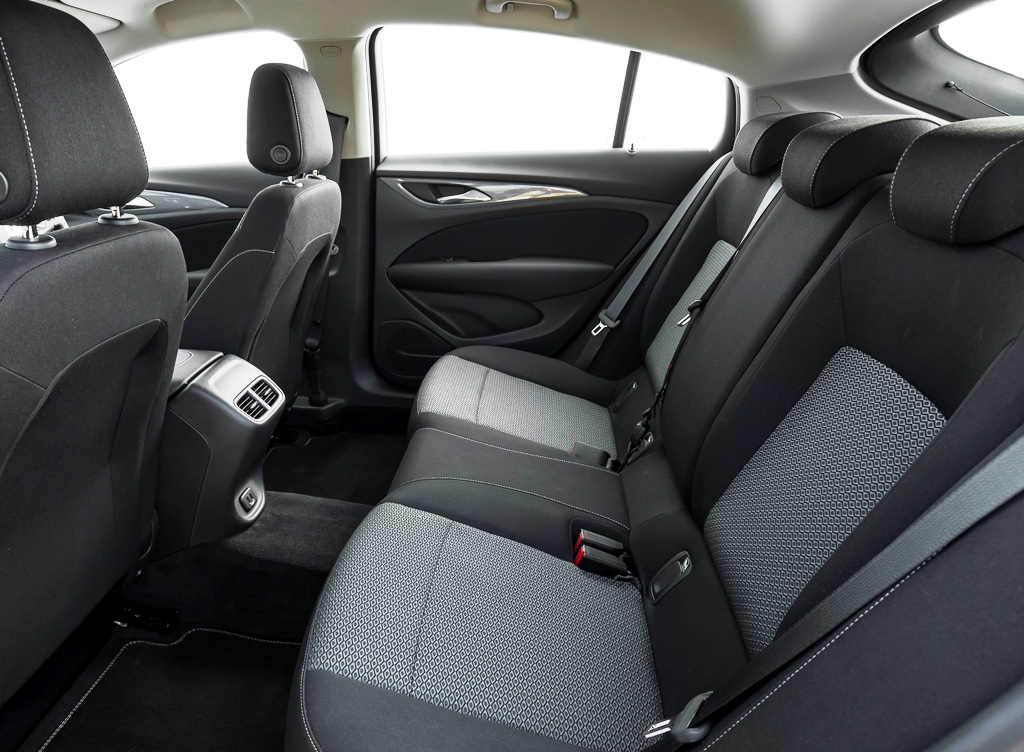 Engine choices are expansive and will depend largely on your leisure and work life balance. There are six engines in total comprising three petrol and three diesels with varying degrees of power output. All are four-cylinder and turbocharged and only the notable 1.5-litre petrol in either 140bhp or 165bhp state of tune is a new unit with the others carried over from the previous Insignia.

The engine range is topped by the 260bhp 2.0-litre performance model that's only available in top-spec Elite trim, with four-wheel drive and Vauxhall's new eight-speed automatic gearbox. This AWD variant includes torque vectoring, which distributes the amount of power to each wheel depending on the driving conditions. 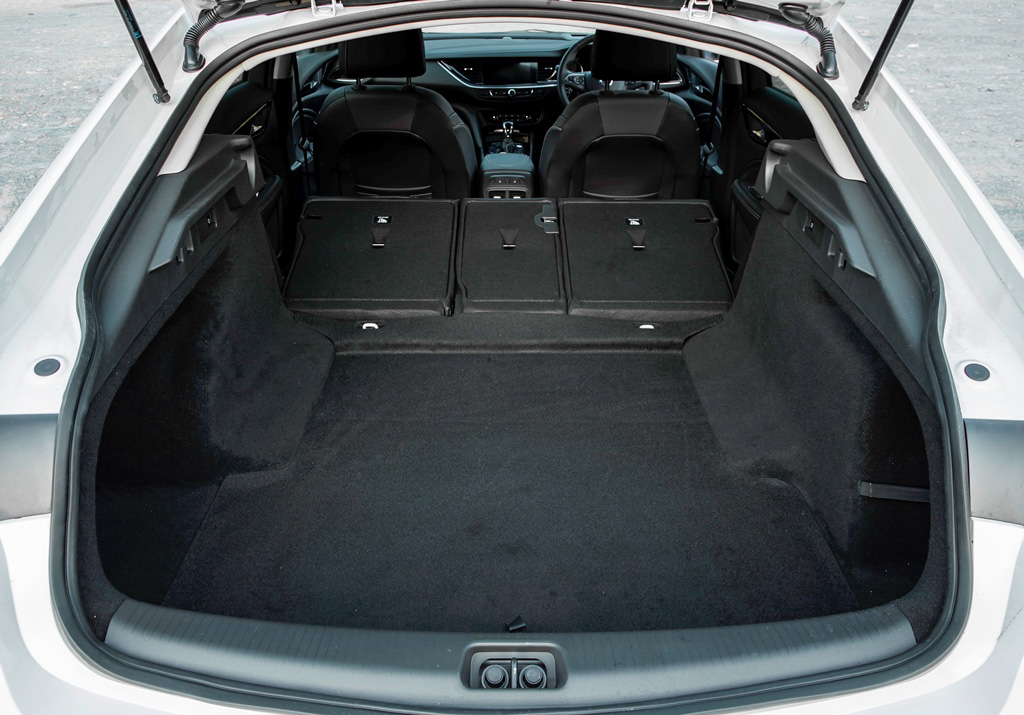 But it's the trio of turbo-diesels that should comprise the majority of the new Insignia Grand Sport sales. The most efficient in the line-up is the 110bhp 1.6-litre which has official emissions and average fuel economy figures of 105g/km and 70.6mpg respectively.

The two other diesels are the same 1.6-litre tuned to 136bhp and a 2.0-litre unit offering 170bhp. Both are the only pair offered with the new automatic gearbox as well as the six-speed manual fitted across the range.

The new Vauxhall Insignia Grand Sport is easy going to drive, but just don't expect too much 'sport'. It's a large car that doesn't feel enormous, cruises smoothly and serenely and gorges on miles without fuss or fanfare.

Motorway stability is excellent and most road surfaces are soaked up without a whimper and handling was grippy, neutral and flat, admittedly with little 'sport' or entertainment. The steering is a tad too light and offers little in terms of feedback. However, the car feels securely planted and there's plenty of grip from the front and rear wheels. 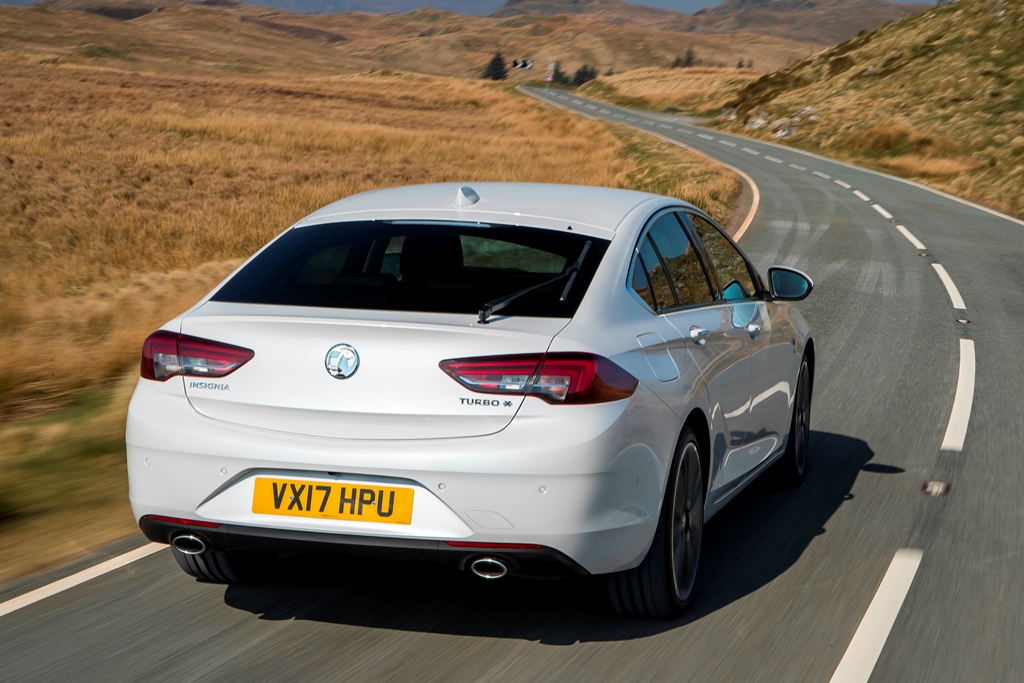 Bearing in mind the size of the car and the quality of the ride, body control is impressive. You can induce quite a bit of lean in a brisk corner but it doesn't lurch around or dive overly so under hard braking.

In terms of its rivals, the new Insignia Grand Sport is a strong car indeed. Vauxhall has worked hard to improve it in pretty much every area and with significant gains in most…it looks great, has a spacious, well-appointed interior, is a pleasure to cruise on the motorway and, most impressively, is less expensive than the outgoing car.

There are many reasons why the Insignia has become one of the most recognisable cars on British roads, but the all-new Insignia Grand Sport just added a whole host of new ones.

➤ Check out our current special offers on the Vauxhall Insignia Grand Sport here, then call our award-winning Customer Service Team on 0800 043 2050. 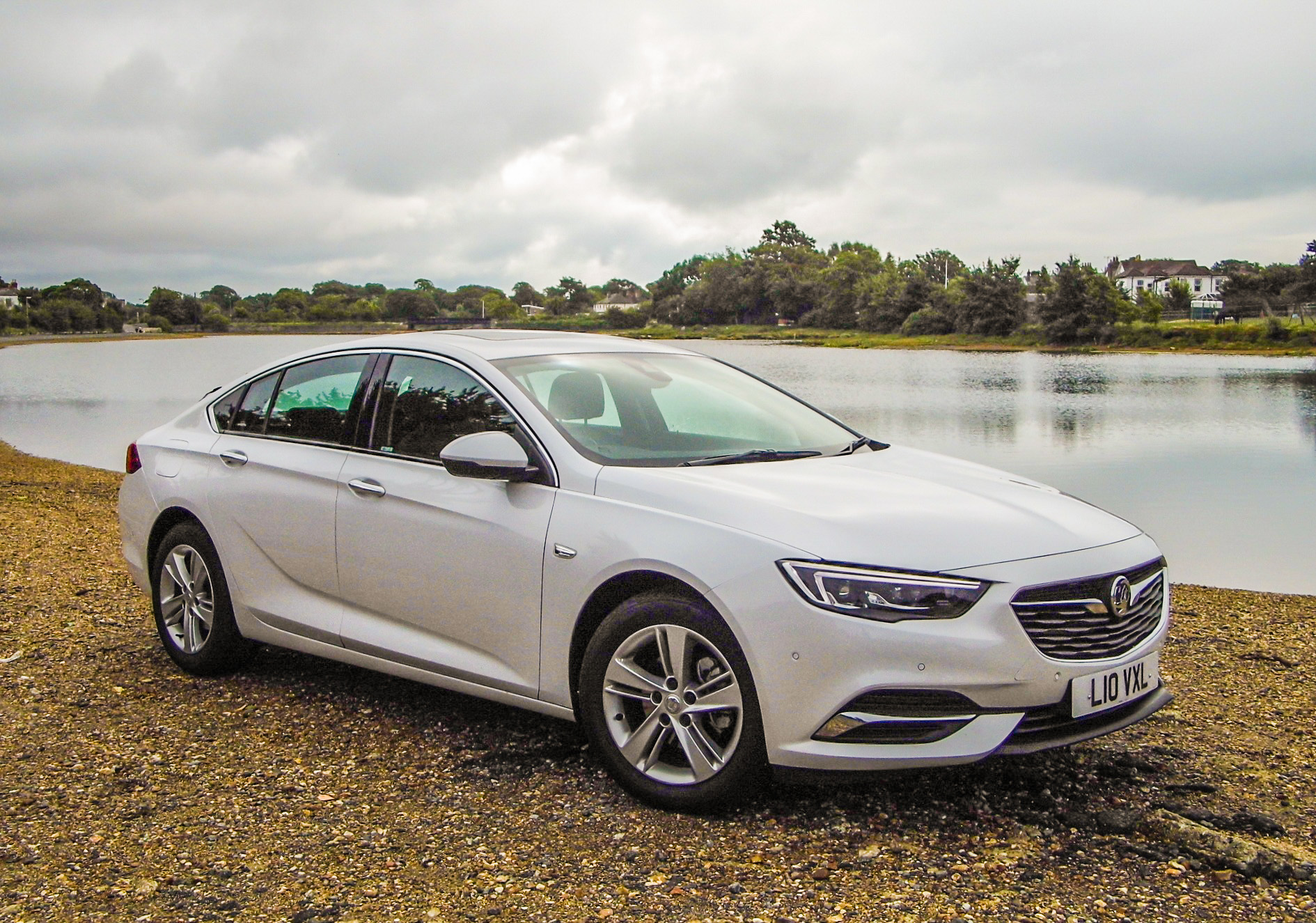